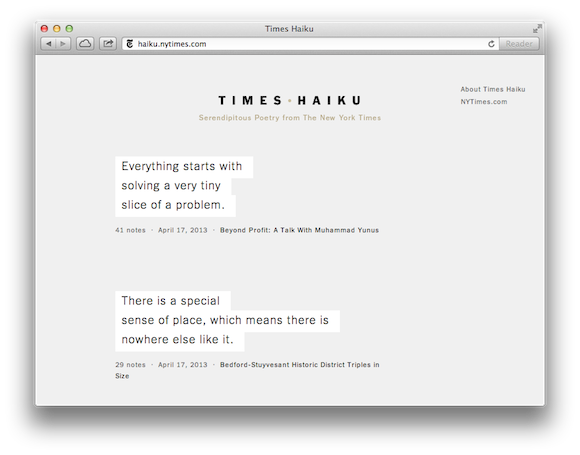 At first glance, Times Haiku just looks like a listing of Haiku’s formulated from the New York Times, but it’s much more than that!

Here’s how it works:

The Haiku’s generated on Times Haiku is first done by a computer algorithm. Although the computer program discards awkwardly constructed poems, a human must still pick out the good ones.

“How does our algorithm work? It periodically checks the New York Times home page for newly published articles. Then it scans each sentence looking for potential haikus by using an electronic dictionary containing syllable counts. We started with a basic rhyming lexicon, but over time we’ve added syllable counts for words like “Rihanna” or “terroir” to keep pace with the broad vocabulary of The Times.”

Why You Seem to Have So Much Spare Time [Comic]