Who Is In Control? You or Your Technology?

There’s a powerful metaphor here, and it’s especially powerful because they are using sheep to do this.

But, it honestly begs the question: “Who’s really in control? Are you or is the technology that you’re using?”

If you’re not, then perhaps you should change your strategy (or maybe you should simply get one).

Digital Iconoclasts – Are You One? – Phil Cooke

Phil Cooke’s brainfood the other day about “iconoclasts” has gotten me thinking:

The definition of “Iconoclast” is someone who does things other people say can’t be done. He or she is an independent thinker – even when that means going against the crowd. That sounds easy to say, but research shows that with enough social pressure, it’s almost impossible for most people to stand alone in their beliefs, views, and opinions.

What’s so fascinating is that at The Orange Conference this year I’ve been able to connect, discuss, and hear from what appears to be numerous “iconoclasts.” Unfortunately, none of them are digital ones.

And that vexes me, because the new front to conquer is the web and the ministries and leaders who grasp it, engage it, and aren’t stopped by the fear that so entangles are going to be the ones that take ministry (and the Church) to the next level.

Perhaps most “brick and mortar” iconoclasts aren’t made to be “digital” ones, but I’m not sure that holds true for the vast majority. A healthy does of courage could probably do the trick.

Are you a “digital” iconoclast? Is there a reason that’s stopping you from being the one that you really are? 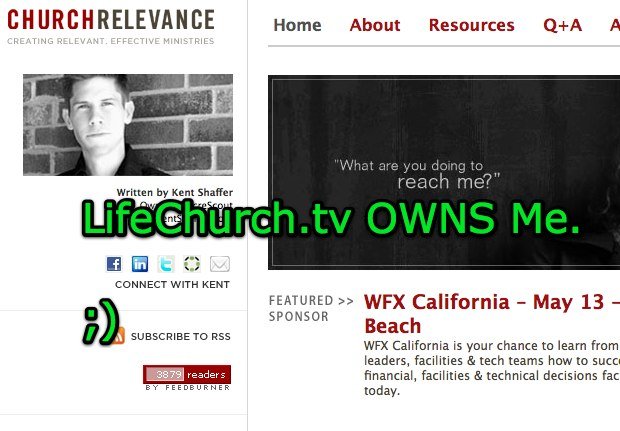 ChurchRevelance’s Kent Shaffer is moving to LifeChurch.tv where he’ll be volunteering at their central offices.

Here’s the congratulatory post on your move Kent! Wish you the very best and perhaps you can help them with some *ahem* marketing (it’s not like you do that or anything…).

Give Kent some well wishes at his blog announce.

Role Reversal In Technology And Church

I recently came back from a trip to Europe where I had the opportunity to visit several cities including Rome, one of the great epicenters of church history. As I toured the beauties of the Vatican and surrounding areas, I was struck with a thought: the greatest minds in the world were focused on making church an awesome place to be.

I mean there I was in the Sistine Chapel, beholding the work of the greatest artistic mind of his time (Michelangelo), who painted what some consider to be the greatest work of art ever.

There I was at the Pantheon. The building originally dedicated to all gods by the Romans and later used as a church. It holds the record for the largest unreinforced concrete dome. It exactly as high as it is wide, seemingly no simple feat at that time. Awesome.

I could go on and on, but here’s the point: in antiquity it was the church that was the “backbone of technological innovation,” to apply the words of Klaas Verbeken to a different subject. New technologies and systems were developed so that they could be used to glorify God. 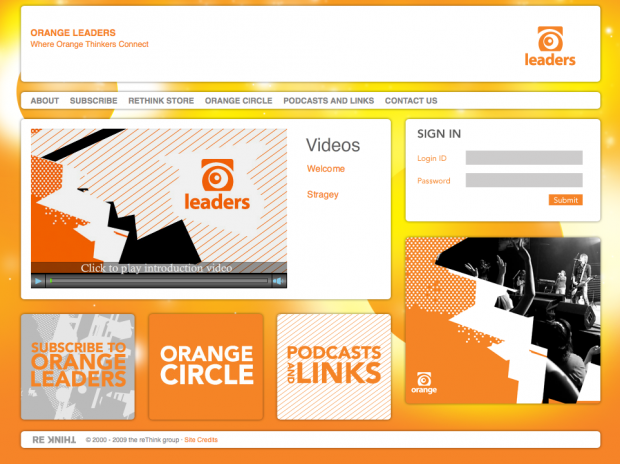 The new OrangeLeaders.com site launched during the Orange Conference yesterday and it’s slick. @Alliswell provided the design and it’s built on WordPress and powered by BBPress for the boards.

Come check it out. It’s the hawtness.

Ministries and Advertising – Thanks Google 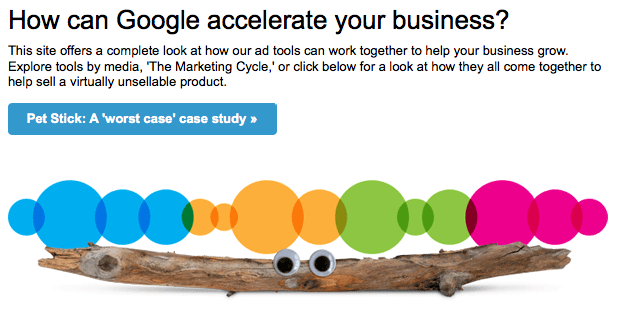 Now, to clarify, you could probably argue what “works” means, but the point is that it does, and when done well, especially in the online space, the results can be phenomenal.

But it takes research and a tad bit of strategy. Thankfully, Google is here to help.

Google recently launched their new Google Advertisers Page to help assist businesses make the most of their campaigns. You can develop plans, a strategy, measure, and optimize through the site in an easy to navigate fashion.

If you’re interested in using Google as a channel for your ministry marketing then reading this resource is a big fat “duh.”

Are you using Google for your advertising right now? How’s that working out for you?