ChurchMag / Web / TeuxDeux: The Simplest (and Prettiest) GTD Out There

TeuxDeux: The Simplest (and Prettiest) GTD Out There

GTD apps are becoming more and more common these days.

Everyone is looking for the best way to track tasks and other ideas. I’ve been looking for a good solution to my needs for a while, and have tried many, but until recently, hadn’t found anything that worked exactly how I thought it should, or more accurately how I wanted it to work.

Then I found this app: 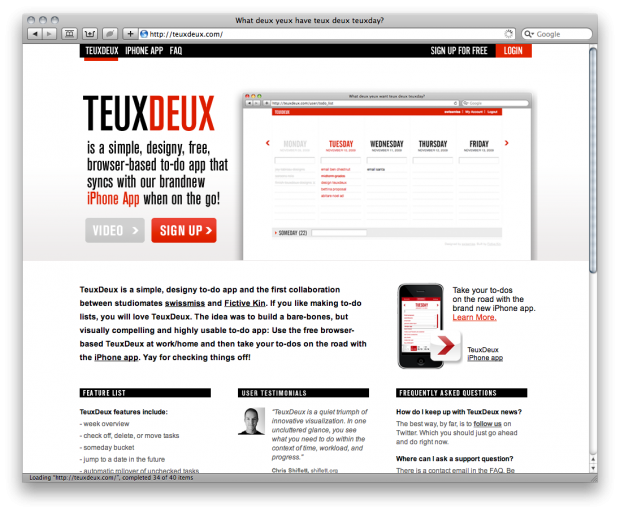 When I began using TeuxDeux it was a web app only. The site suggested that an iPhone app would be coming soon, so that convinced me to stick around. I’m definitely glad I did.

Its simplicity and ease of use are what convinced me that it was the GTD app I should be using. 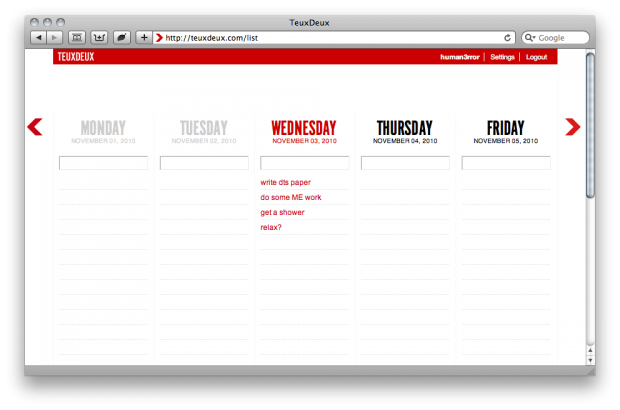 The interface is very spartan, giving you boxes to input to-do items, and then allowing you to reorder them as you see fit once they’re added into a column. At the bottom, you’ll also notice a place for items that may not have a set due date, which TeuxDeux calls “Someday” items.

You can also edit items that you’ve already added by dragging them back to the box they were created in.

The iPhone app is very similar, except it only shows you one day at a time, rather than 5 like the website. You can still drag to reorder tasks, or drag back to the input box to edit as well.

The app syncs with the website, so all your tasks stay current in both places. The only issue I have with the app is that it’s fullscreen, so I can’t see the iPhone’s status bar.

At $2.99, it’s a bargain compared to the monthly fee most other GTD apps charge for syncing between a desktop client and your iPhone or other mobile device.

If you don’t need all the bells and whistles of GTD apps like Remember The Milk or Things then I would highly recommend checking out TeuxDeux. It’s really streamlined my GTD workflow, and made adding new tasks or marking tasks complete so much faster.

Be More Creative with the Help of Video Games