The Ultimate Guide to Becoming a Flipboard Pro: Creating Magazines

[Editor’s Note: This is part 3 of an ongoing series, The Ultimate Guide to Becoming a Flipboard Pro. Start here!]

Originally, Flipboard was ‘just’ a reader, albeit a nice one. But in the beginning of this year, they opened up the option for users to create their own magazines and that gave Flipboard a whole new dimension.

Here’s how you can make your own!

So let’s dig a little deeper into creating such a Flipboard magazine. First of all, create is not really the right word here, it’s actually curating. That’s because usually most of the content you use won’t be your own, but content from others you ‘curate’ into a magazine.

Secondly, the word magazine is a bit deceptive here. Flipboard magazines aren’t periodical for example, they’re created once and then you keep adding to them (and deleting older entries if you want). So, if you were interested in all things Mac for instance, you’d create a magazine once called ‘All things Mac’ and then you’d keep adding to it. In that sense these magazines aren’t that different from the pinboards on Pinterest.

Also, the editing possibilities for these magazines are very limited. You can choose articles, photos and videos and more or less decide on the order you want them in and you can determine the photo for the cover, but that’s about it. And even doing that isn’t as user friendly and intuitive as one would hope.

Still, it’s kind of cool to assemble things you find beautiful or interesting and make them into a mobile magazine, so let’s have a look at how to do this.

There are two ways of going about creating a Flipboard magazine. The first is via the Flipboard app on your iPad or iPhone and the second is via the editor. Personally, I find the latter easier to use, mostly because of the option to change the order of the stories. That’s kind of ironic obviously given the fact that Flipboard was created for the iPad.

Be aware though that synchronization doesn’t work well between desktop and app, when creating my magazine I’ve had to logout on my iPad and login again because it would not automatically refresh after making changes from my desktop.

Creating a Flipboard Magazine with the Editor

Open the Flipboard editor on your desktop or notebook. It will ask you to log in with your Flipboard account. You’ll see the option ‘Create a magazine’. 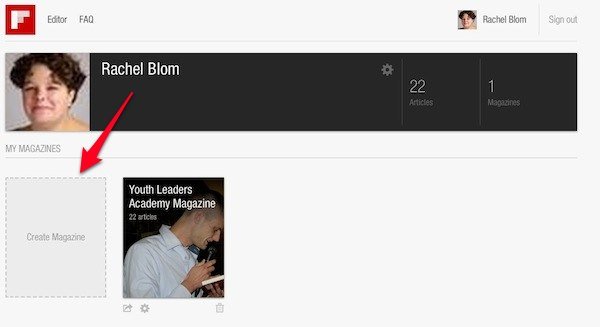 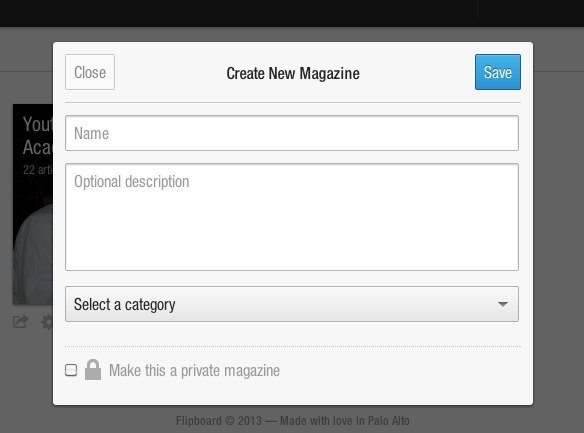 Now the trick is to find things you want to add to your magazine. The first thing you’ll need is the Flipboard Bookmarklet for your browser. Now anything you come across on the web can be ‘flipped’ into your magazine. Just find a post you like, click the ‘Flip it’ button in your bookmarks and this screen appears: 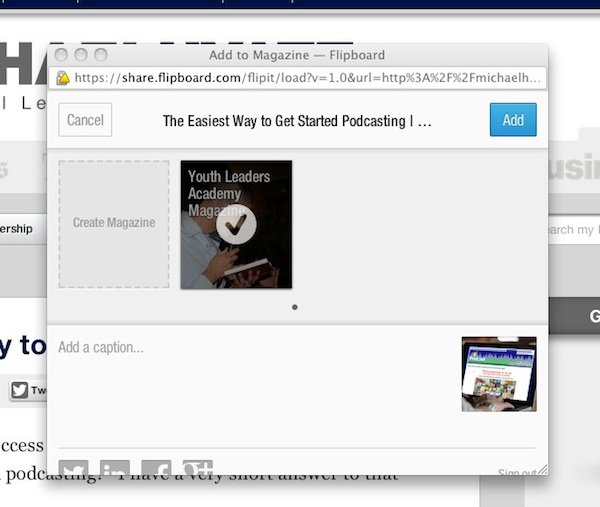 You can choose the magazine you want to add it to and even add a caption if you want. Voila, that’s done.

You can also add YouTube videos by opening them on the YouTube site and then use the Flipboard Bookmarklet to flip them into your magazine. The same goes for photos.

Flipboard claims that you can also flip photos directly from for instance Instagram, Flickr and Pinterest. I haven’t tried the first ones because I don’t use them, but with Pinterest I ran into some weird bugs. Sometimes it would flip the picture, sometimes it would just show the name of the link. I haven’t been able to figure out what the problem is.

Once you’ve assembled some great content, you can change the order by dragging the items. It’s important to know that the last item added is used as the cover, but you can change this easily. Just choose the cover you want and click in the little rectangle button below it to make it the cover photo. If you want to delete an item, click on the trash can. 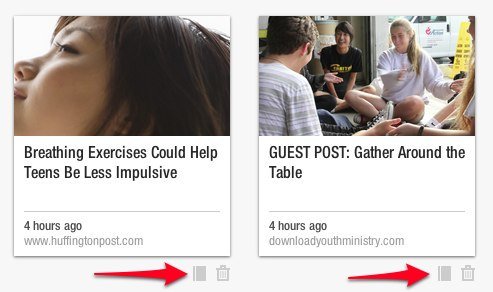 Of course, you can’t really see what your magazine looks like on your desktop, so by then you’ll have to switch to your iPad.

Creating a Flipboard Magazine on Your iPad

The second way of creating a magazine is via the iPad app (or Android app, but I’m using the iPad version here). The first part is exactly the same, only adding content is a little different. There is a bookmarklet that’s supposed to make ‘flipping’ content you come across possible, but I haven’t been able to get it to work yet.

That means that most of your content will have to come out of magazines you’re subscribed to (you can flip articles you like into your own magazine, much like the repining on Pinterest) or from sites/feeds you’re subscribed to. If you’re reading a Flipboard magazine, you can flip the content to your own magazine by tapping the + button. Just choose the magazine you want to add it to and add a caption if you want. 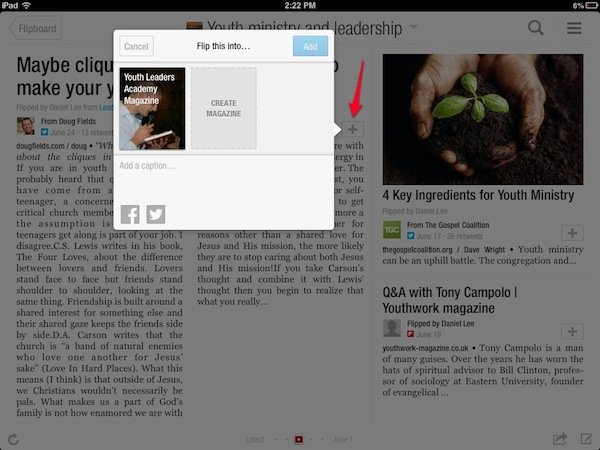 The same goes for websites you read via Flipboard, each article has that same + sign you can use to add it to your magazine.

When you’re happy with the magazine you’ve created, you can share it via email, Twitter of Facebook. Just open your magazine and on the front page, there’s a sharing button. 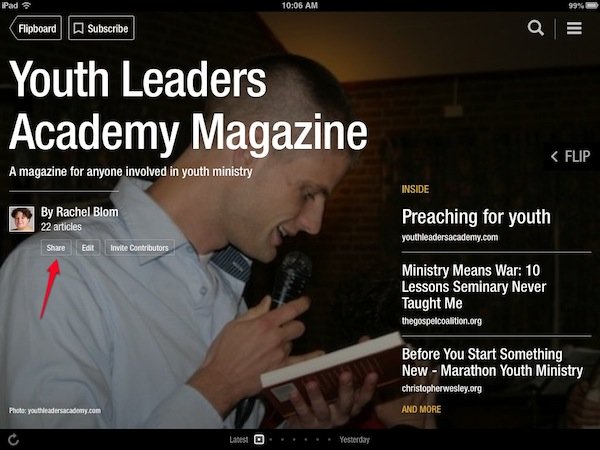 People obviously can only see it on a mobile device. If they are Flipboard users, they can subscribe to your magazine and thus get all new additions in their Cover Stories.

That latter is something to keep in mind. You do not create a new version of a magazine every say two weeks, you keep adding to the same version. Of course you can decide to delete older stories to prevent your magazine from expanding into a book, but the idea is to create one magazine per niche or topic and then keep updating that.

A fairly new feature on Flipboard is that you can add other contributors to your magazine, meaning you can co-create a magazine with several people. Quite handy if you’re part of a bigger team that wants to use Flipboard. Just tap or click the ‘Invite contributors’ button which will open your email app and let you send an email to people you want to contribute to your magazine. 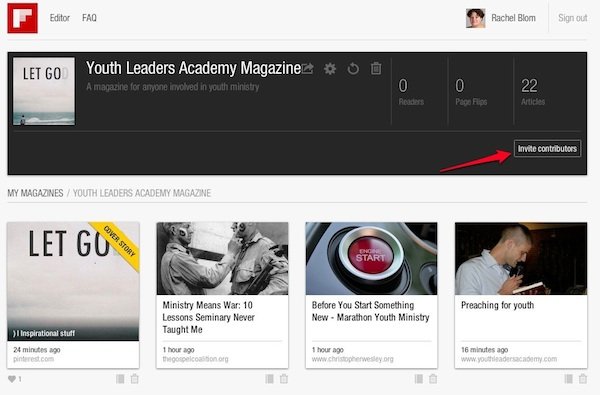 I’d love to see examples of Flipboard magazines ChurchMag users created, so if you’re a curator please share your link!

There are 19 comments already... Come join us! 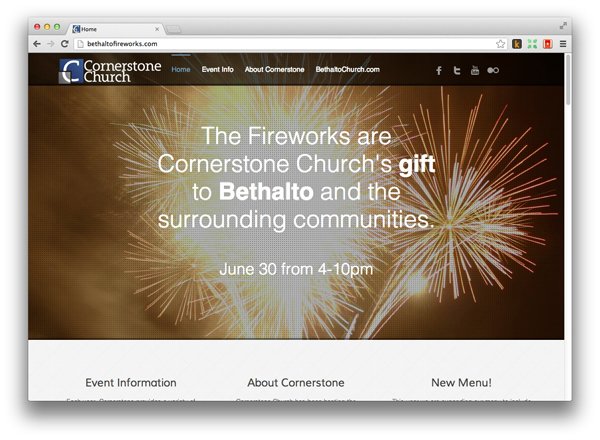 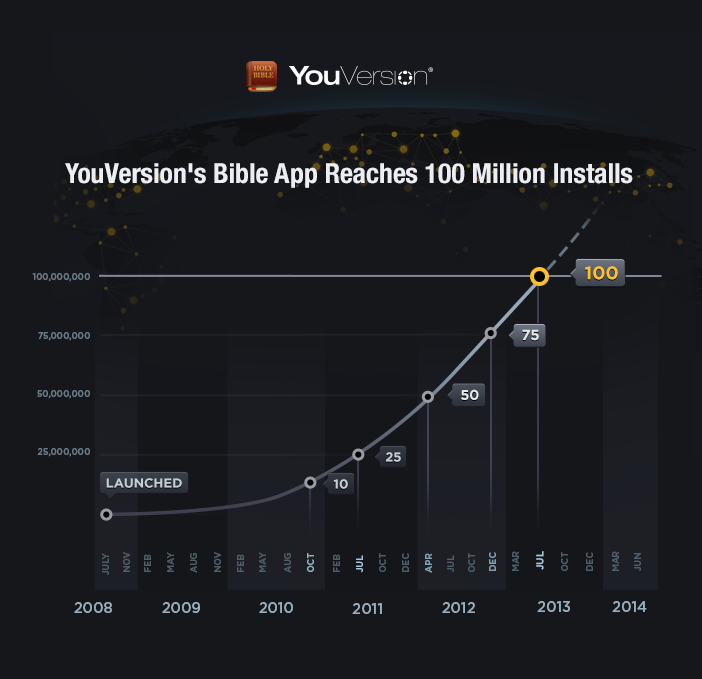