The Open Web Awards is officially open for nominations!  After being selected as a partner, it’s our “duty” to provide these cool widgets and badges for voting!

Open Web Awards is the only multilingual international online voting competition that covers major innovations in web technology. Through an online nominating and voting process, the Open Web Awards recognizes and honors the top achievements in 26 categories.

So, I’d thought we get some representation in here!

I’d like to nominate RagamuffinSoul.com for the “Non-Profit Causes” category because of the amazing community he’s generating over there.

Got any other suggestions? Feel free to nominate and vote for even more at Open Web Awards!!!

Free stuff motivates.  I think we can all agree with that.

During college, it was all about finding free food.  It almost didn’t matter what the event was or the organization holding it or even the cause that was being supported.

Free hamburgers?  Sure, I’ll support “No more offshore drilling” for a day.  Free Tshirts and coffee mugs?  Yup, I’ll be there and no, I don’t mind having to wear that wristband for a couple minutes for cancer.  Free “entire meals” deals complete with drinks, sides, and a main course?  Sure, I’ll be a “christian” for a day and join those wierdos in the student lobby singing praise songs to a God who supposedly died on a tree…

And what’s so great is that the internet should be a prime resource for not only giving away “free” stuff but also providing added benefits for marketing (if you can find a creative and easy way to do it).

Thomas Nelson Publishers has done just that with their new initiative called Book Review Bloggers, which has a super simple premise:  They’ll send you a free copy of a book if you promise to blog a 200 word review and another one on Amazon.com (and it doesn’t have to be positive!) 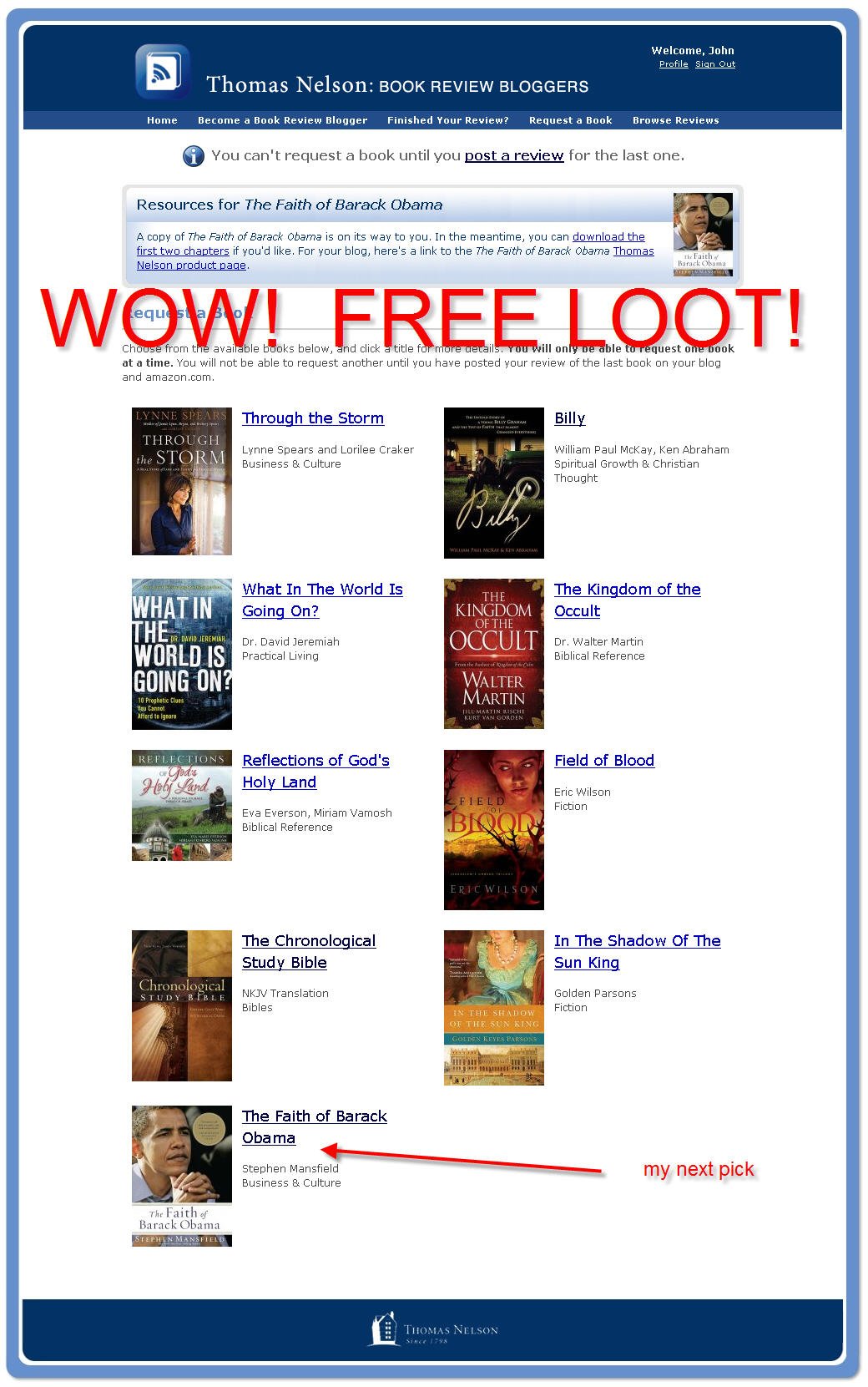 Not only do they get ratings and reviews on Amazon, one of the most visited online bookseller in the entire world, they’ve injected themselves into the blogging space where viral and grassroots marketing can blaze through the interwebs faster than a California firestorm (and that can be a good thing or a bad thing, like the SoCal fires of course). 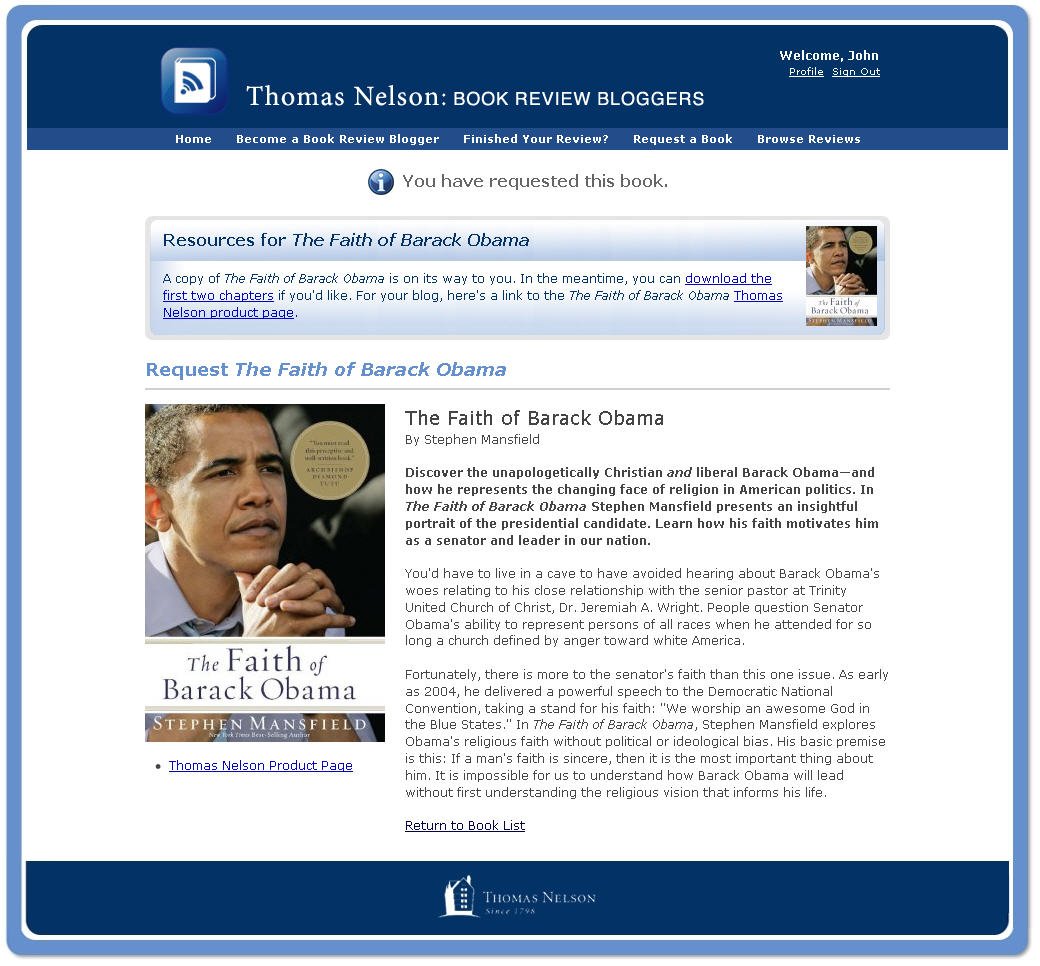 But the point is that people are talking about it.

I’m not familiar with the costs associated with publishing a book (perhaps some day) but I can’t imagine that Thomas Nelson and co are losing anything but pennies on the dollar for their free reviews (but shipping might be a pain in the tookus).

So go ahead and signup.  It’s free, takes a second, and then get your phat-free-loot-on.  I’ve already done my first review on Lynne Spears Through the Storm… easy cakes!

If you want even more information, check out Michael Hyatt’s (President and CEO) blog post about it.

So do some creative thinking this week about your ministry and online agenda for your organization.  Does it include giving away something for “free”?  Is this a reasonable initiative from a financial, business, marketing, and strategic perspective?  (One size doesn’t fit all, of course). 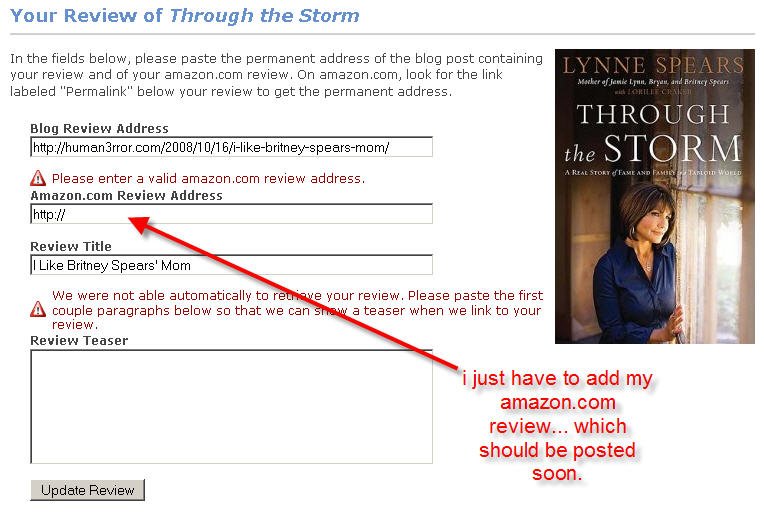 Ah, and remember, the Gospel of Jesus Christ is free too.  Don’t forget that.  =)

Cool!  We’ve been chosen and given the opportunity to be a partner for the Open Web Awards!  The 411 direct:

Open Web Awards is the only multilingual international online voting competition that covers major innovations in web technology. Through an online nominating and voting process, the Open Web Awards recognizes and honors the top achievements in 26 categories.

I’ll be putting in some nominations for the evangelical community and would love to have any suggestions from you guys!

Also, as a partner, we get to have 1 vote per category, and instead of me making the decisions, I’d love to poll you guys on how to use my votes!

Blogging is a Waste of Your Time

Or at least according to this extremely true yet somewhat tongue-in-cheek article on Wired.  Paul says:

Writing a weblog today isn’t the bright idea it was four years ago. The blogosphere, once a freshwater oasis of folksy self-expression and clever thought, has been flooded by a tsunami of paid bilge. Cut-rate journalists and underground marketing campaigns now drown out the authentic voices of amateur wordsmiths. It’s almost impossible to get noticed, except by hecklers. And why bother? The time it takes to craft sharp, witty blog prose is better spent expressing yourself on Flickr, Facebook, or Twitter.

If you quit now, you’re in good company.

I had to laugh because when I first started blogging the blogging landscape had only begun to be formed.  It was an exciting time and I updated this blog about 3-5 times a day with word counts averaging from 300 to over 1000 per post!

But that wasn’t the craziest thing.  It was the fact that my digital handle (online screen name) at the time reached google-sized proportions.  So much so that the coverage was too much that I had to shut it down (and I was going through some of your typical “why the heck am i blogging really…?!?” periods).

In fact, a quick google search for it still brings up stuff back in 2002, which makes me feel just as nauseated as finding pickles in my chick-fil-a sandwhich after I had asked for them to be taken out.

So, what does that mean for Ministry Blogging?

Not much.  That’s probably because, generally speaking, the Church is about 4 years behind (if not more) technologically than the rest of the world.  Of course we have our usual vangaurd of evangelical bloggers, but that’s more the exception than the rule.

Paul does bring up an interesting point citing Jason Calacanis (super well known blogger and entrepreneur) and his reasoning for dropping the blog.  In his farewell address Jason says:

And this is our “win” scenario for why we must continue blogging: As believers we are called to naturally share ourselves in authentic, engaging, intimate, and personal way because that’s how we’ve been saved: An authentic and real God came down in the form of man, engaged us in an intimate and personal way, and gave us a testimony as He gave us new life in Christ.

We are now called to proclaim this message.

So blogging for the evangelical should, by definition, incorporate some of these aformentioned qualities.  (I’m certainly aware that many Christians do not vocally express their faith and that’s fine, no legalism here.)

Calacanis may have retreated to a “safer” place, but we definitely shouldn’t.

Iterend seems to be the newest entry into the already rather large blog search engine industry with giants like Technorati, and the newer version of Google Blog Search, both of which I’m big fans of.

Below you’ll see a screenshot of the homepage I took this morning.  A cluttered mess with a huge tag cloud the size of your wallet before the stock market plummeted, and then on the right it’s got some “Top Stories”, which I’m unsure of how they calculate that.

You can search by time stamp, language, and then by sentence or post. 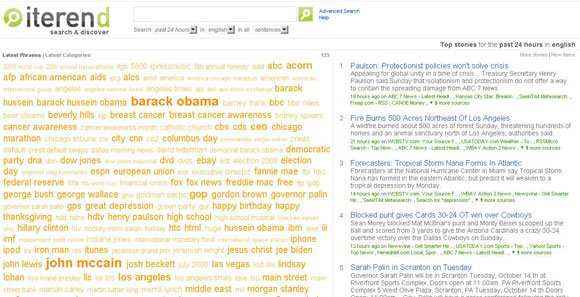 So, what the good word?  A quick search result for my church “North Point Community Church” from the 2 giants plus the “trying-to-be-a-giant-killer” give the 411:

But, we’ve got to still give it a chance, since it’s still in BETA, which gives it a week or so to get going.  I’ll be interested to see if I can add it to the blog search engines that I crawl (although I’m not interested in increasing my time web crawling… so it better be good).

If you want, Mashable’s got a great vid here that goes through a comparison between Technorati and Iterend:

A friend happened to pass this by me the other day and after a couple clicks, I liked what I saw (which is telling, because if it doesn’t grab me, I’m not staying).  I even took it one step further and went the their sign-up process (painless, but nothing special).

What grabbed me though was the extremely tight look’n’feel and the content display… I like their simple and streamlined look.  And the organizational pages were well created and styled appropriately.

The profile page was also clean and simple to understand.

Oh, and did I mention that the concept was kick butt too?  Change.org is a blog network built around social issues, like genocide, women’s rights, poverty, social entrepreneurship, and homelessness.  It appears that each cause is handled by one or more individuals that is extremely passionate about the topic (and probably knowledgeable as well) which can really grab your already-short attention span.

Perhaps it’s a fitting time for something like this to pop up?  As the founder, Ben Rattray says:

“The surging interest in social causes and civic participation we see across the country has the potential to transform the way we address social problems, but too often there is a disconnect between that interest and outlets for action. The internet offers the unique potential for bridging this gap, and I think one of its biggest achievements will be to serve as a platform for empowering broad-based social change. With today’s launch, we’re one step closer to making that happen.”

I couldn’t agree more with the “bridging the gap” idea.  Biggest achievement…? Maybe.  But certainly one step closer.  I think the mantra he’s got going here is something very close to my heart, and should be what keeps us going to drive for ingenuity and innovation for using web tech for the Kingdom. 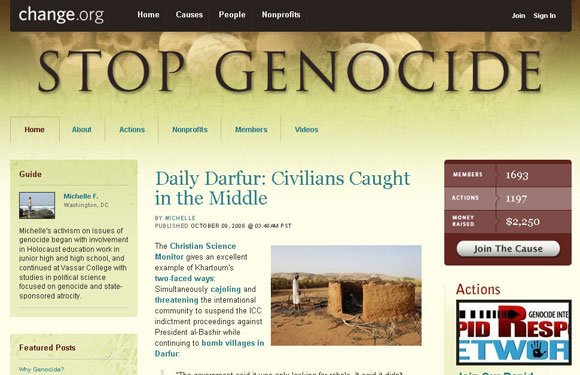 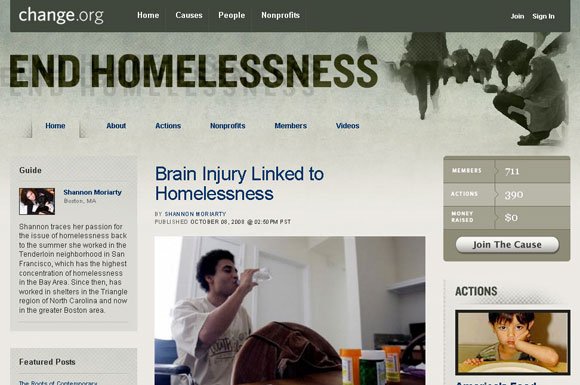 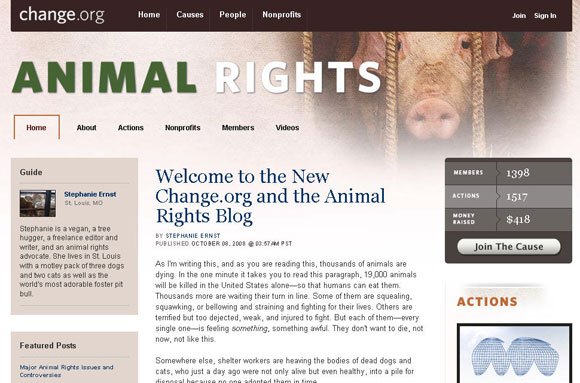