The Ubuntu mobile OS made a splash upon its release and now the hardware is just around the corner.

Next May 2014, the Ubuntu Edge will be built specifically for the Ubuntu mobile OS. It looks pretty awesome.

Is this going to give Apple and Google a run for their money?

I’ll be honest, it wasn’t until now, that I’ve seen something that has the potential to be an iPhone killer.

Could this be an iPhone killer?

Is there room for another mobile OS? 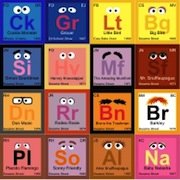 The Periodic Table of the Muppets