Top 5 Commenting Platforms and The Winner in My Book

I’ve been experimenting with a number of commenting systems within the past two months and I have discovered one common thing among all of the 3rd party commenting platforms:

But let me be clear the airwaves of the negativity because, for starters, they are all better than the system that comes out of a white and vanilla install of WordPress and all the “other” blogging platforms, which we shall not name.

So here are my thoughts on the top 5 commenting systems and platforms that will do you no wrong and where I’m going to finally put my foot down and commit.

Things to know before you proceed any further:

Sezwho was founded in October of 2006 and was released with decent fanfare and review.  Touted as a “universal profile service” it first caught my attention when it went mainstream back when I worked for the man. 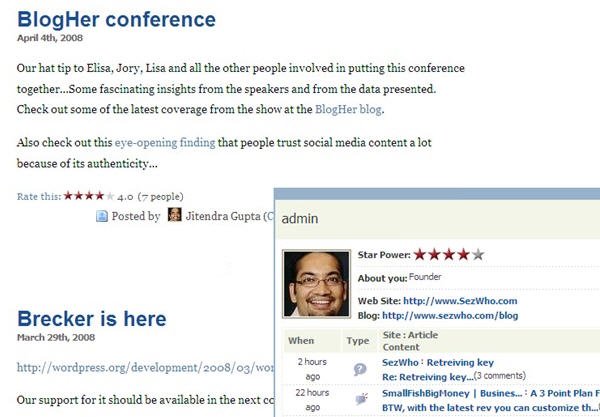 # of Blogs that unfortunately experienced an install: 2
# of Comments made before “suckage” level was met to force uninstall: 102
Final Thoughts: Watch the demo and get a laugh about how this guy talks about their revolutionary product.  You know, it’s almost 2009… right?  Web 2.0 isn’t that “new” anymore, is it?

[EDITOR’S NOTE: coComment has vanished from the web. If it reappears, let us know!]

coComment is another comment-enhancement platform which also came out in early 2006.  I stayed away from this one initially like one of Roenne’s poopy diapers that I left under her bed.

When it first came out you had to do something to the effect of installing a “bookmarklet” on your browser and using that “bookmarklet” instead of the perfectly good blog interface to leave a comment.  Users then, if they so chose, could push those comments and content onto their own blogs with a widget…?

And guess what?  After a healthy round of funding and some “massive” changes, you still have to install those fuddy duddy “bookmarklets”. 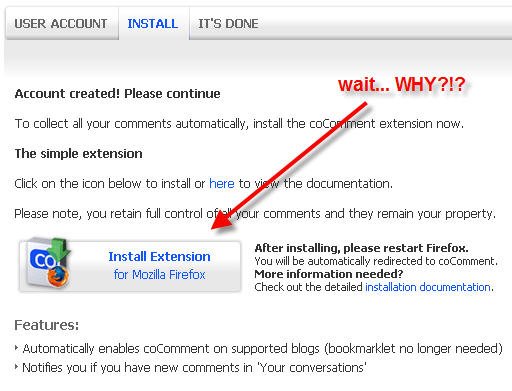 # of Blogs that unfortunately experienced an install: 0 (Why? because I had a “bookmarklet”!)
# of Comments made before “suckage” level was met to force uninstall: 78 (I reinstalled FireFox too…)
Final Thoughts: There are some other services that don’t “suck” as much. I’d say something creative hear but words escape even the most *ahem* creative…

JS-Kit has been covered extensively by a number of large editorials and has gotten a good number of rounds going for funding.  More of a Widget-factory, their commenting system first caught my eye because of the sheer amount of coverage.

Installing was simple, getting it to work, not so nice.  They’ve rolled out a number of features over the past few months and the product has gotten better over time.  Unfortunately partnering with someone like AOL automatically puts this in the suck-bucket, even if it’s just a distribution play.

Finally, they have a strategic partner with coComment that was announced not too long ago.  coComment, covered above, also sucks, which means by default (and let’s not forget AOL) that JS-Kit sucks too. 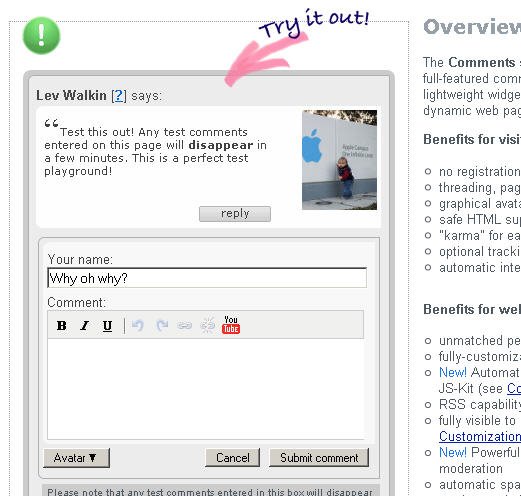 # of Blogs that unfortunately experienced an install: 3 (I really tried… I did…)
# of Comments made before “suckage” level was met to force uninstall: 245 (Not bad…!)
Final Thoughts: JS-Kit’s commenting system is awesome for a site that doesn’t already have comments, like the first site you made with Microsoft’s Frontpage.  Otherwise, save yourself some time unpacking, uploading, and installing this bad boy.

Disqus was established in mid 2007 and has already gathered together a number of high-profile bloggers.

Like many of the networked commenting platforms, the more you use it the more others will use it and adopt it for their own.

Only until recently this service completely sucked because it remotely stored your comments in their proprietary systems.  This means that if you decided to stop using the service it would be likened to chopping off one of your arms; those comments would be gone forever.

Although they’ve recently updated it so that the comments are now sync’d I’ve personally found a ton of buggy user experience glitches and if you like cacheing your blog (which you probably should) then this thing hates that.  Also, if you like refreshing the page every single time you post a comment, then this one’s for you!

Finally, if you like your Disqus commenting “forum” to be ranked high on the Google ranks, then go for it.  This, personally, sucks.  I’d rather you get the content and link to my site instead of the forums (which I’ve never ever used outside and independent from my blogs).

Nice try, but as one review noted, it still needs to “evolve”. 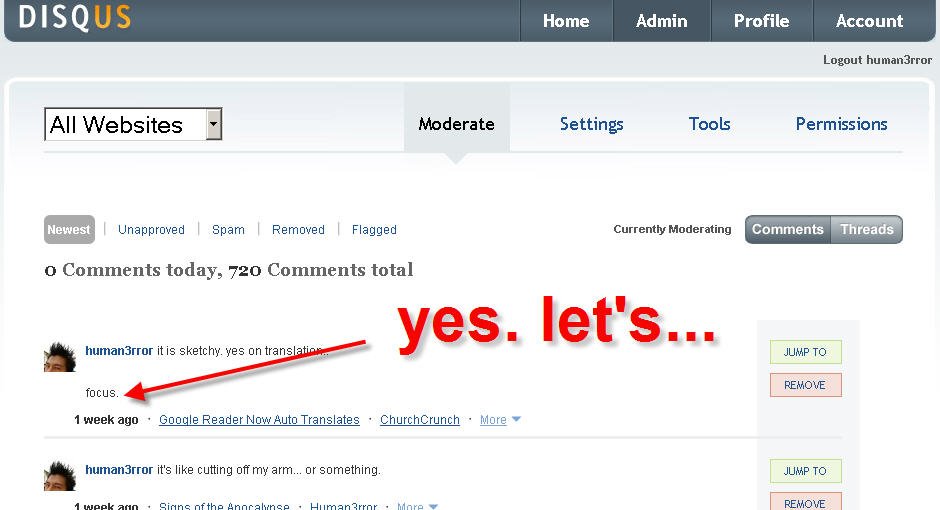 # of Blogs that unfortunately experienced an install: 5 (I really really really tried…)
# of Comments made before “suckage” level was met to force uninstall: 720 (Yeah. A lot.)
Final Thoughts: I’d much rather prefer a “full-cycle” evolutionary experience than a half-baked one.  It’s like growing back half of the arm that you had cut off when you first installed it…!  (Perhaps half an arm is better than not any at all…)

IntenseDebate is the final review that I’ll be showcasing tonight, even though there are a number of other commenting systems and platforms that I’ve tested, but I’m too embarassed to share that list.

IntenseDebate has been cursed for me from the get-go.  After installing on my two most traffic’d blogs I lost 30% of all my comments instantly.

A development flaw was found an I was asked to re-import and re-sync them.  So, I did.  This messed it up even more.  But let’s move onto style, shall we?

Apparently IntenseDebate hates your CSS and doesn’t play nice.  For those that value the look and feel of their blog and likes a sense of consistency, then you might want to skip the painful process of managing this potential battle.

Also, if you like having to manually “hack” their widgets to get them to work which also requires you to memorize your blogs numerical ID from their dbases, well, then you’ll have lots of fun and you should install this immediately!

Finally, if you like some of their cool “perks” like being able to reply via email only to find that it really doesn’t work as intended and makes you paranoid forever because you’re never quite sure if your reply ever got there… then you must really like Halloween and should also be an instant “install-me-now” move. 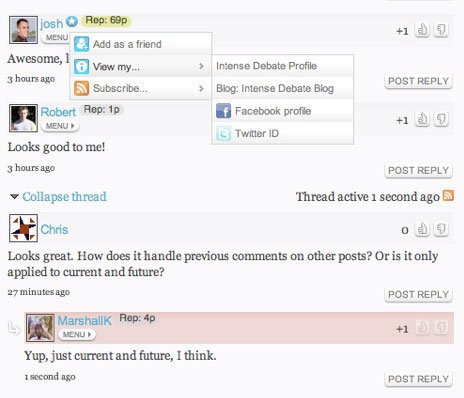 # of Blogs that unfortunately experienced an install: 3 (Not bad… I learned from Disqus.)
# of Comments made before “suckage” level was met to force (thinking about an) uninstall: 372 (And counting…)
Final Thoughts: If you love painful installs and broken functionalities then rock it solid bro.

Which leads us to the end and my pick for the platform that didn’t suck the most.  But let me first explain a bit of background…

The first thing is that I’ve only highlighted all the stuff that went terribly wrong and the things that irked me the most about the platforms.  I did not write about what I really liked about them, which is unfair, but that’s how I decided to write this post.

There are, in fact, much more “positive” things that I could write about each of them than the negatives, and that’s why I could, with a safe and secure conscience, recommend most of them to any blogger who was curious enough to throw down an install.

But all of them still suck.  And here’s why:

So, now that you have heard the rant, here’s my pick moving forward:

And here’s a few reasons why:

So, with that, I’m diving deep into IntenseDebate.  It’s not perfect, but it’s got a good start.  If you’re using one of the other mentioned platforms and comment-enhancing systems, I won’t be dogmatic and do something like suggest you ditch it for an obviously superior product…

But I’d kindly suggest you give it a try.

Cheers!  Have a great Thanksgiving everyone!

There are 41 comments already... Come join us!

Building Apps for the Heck of It