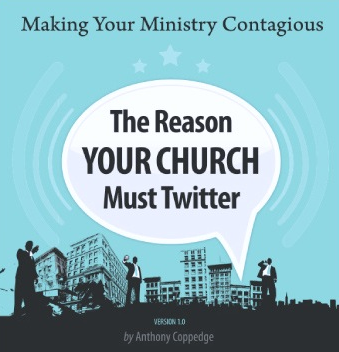 Anthony Coppedge has recently released a new e-Book titled “The Reason Your Church Must Twitter“.

And in typical style the evangelical community at large has been singing (or tweeting) its praises.

If that’s how you roll then you can read a few of those “positive” reviews below and then you can stop reading this post; you’ll have more than enough reason to drop the Abe Lincoln:

If you’d like some of my personal thoughts about the book (and remember that they are my thoughts, not yours) then you may proceed with caution.

Twitter has, without question, burst onto the world-wide scene. The recent plane crash a number of days ago showed the world the power, and especially speed, of Twitter as a news medium:

Within minutes there were hundreds of Tweets about the crash, complete with pictures from eyewitnesses and even one person who was on a NYC ferry headed to the crash site to pick up passengers.

That’s amazing power, all thanks to the mobile phone and a social networking tool called Twitter. News spreads like wildfire when you can tell 100, 500, 1,000 people at once with a single Tweet.

But let’s jump out of the “digital fishbowl” for a second and remember that the vast majority of internet users are not on Twitter.

This limits the power of Twitter because the only people who can get the information are the ones that are part of the service (and let’s not forget that only those who are “active” during the news break will get it when it’s “hot”).

This is classically understood as the “network effect” or “network externality”: The value of the service increases (for all users) as more people use the service:

The classic example is the telephone. The more people own telephones, the more valuable the telephone is to each owner.

But, all that to say, should this necessarily stop you? Perhaps not. That doesn’t bother me.

But here are a few things that I find “interesting” and that do bother me, if you will:

Anthony is not what I would consider a Power User of Twitter. With far less than 1k tweets on his main handle, I’m not so sure I call that “experienced.”

The pure and simple fact is that the more you use it the more you know about it. There are more users out there with far more experience that could bring insight with a bit more depth. 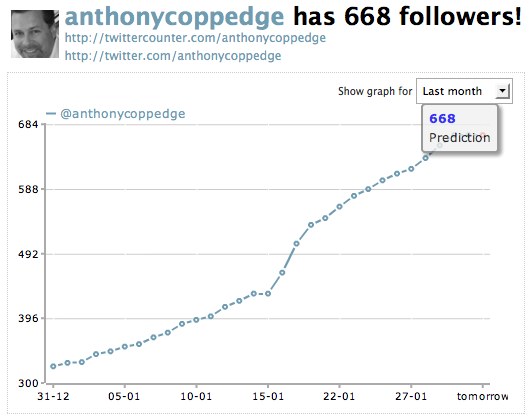 In addition, Anthony only had 433 followers at the time of his launch. That’s not impressive and doesn’t even make him close as a “Twitterati” contender.

You can see the jump in his followers, after his launch post, but even then, his follower count is a bit low to be producing an “authoritative” source on how to use Twitter.

It wouldn’t take me 3 seconds to think of 10 more experienced Twitter users who I’d trust to provide an equal and balanced review. And no, I don’t even put myself in that bucket either.

The most “obvious” reason that Anthony states a church must use twitter is may not be the worst reason in my book but it’s certainly not the best. He suggests on page 4 that “Twitter is a free and simple way to connect churches to the cell phones of their congregation, volunteers and staff.”

You see, technology used effectively considers above all else, especially for the church (those that are “in”), one thing: Adoption.

Trying to get more people connected and using Twitter is hard enough for many. Trying to then tie it together with the use as a mobile application and communication device is terrible. You essentially made the barrier of adoption even higher.

I’ll submit that, in theory, the practice could be valuable. But throw that at any executive pastor worth their weight and I’d be hard pressed to believe you’d win hands down.

It’s a two-sided coin but only 1 side is shown. Simply put, there isn’t an equal treatment of why one shouldn’t use Twitter. Now, it’s obviously apparent that Anthony is arguing one-side, but any ministry who wants to be strategic with their approach is going to ask the hard questions, many of which aren’t answered in Anthony’s treatment.

Strategy for ROI is suggested by no specific strategies are given. As a guy who eats, sleeps, and breathes product development lifecycle and business application ROI, this as the poorest suite, not to mention that Social Media ROI is still is the bane of most, if not all, of enterprise businesses in the marketplace.

If the Fortune 50 can’t get it right and have blown billions of dollars trying, then it might be wise to investigate this a bit further perhaps? I would have loved to see some actual ways of measuring the effectiveness (page 59)… but after being in the space for as long as I have, even I’d have trouble here.

So What? What’s the Bottom Line?


So, with the combination of the issues of “critical mass” usage as well as “adoption” concerns, I find the book, as a comprehensive resource and argument, not as strong as some others may have pronounced.

So how does this practically apply to one’s desire to provide an adequate, robust, and effective proof case for Twitter as a ministry and church tool?

Just one thing is required: Education.

If you’re not interested in learning how Twitter can be used for ministry and your church, then you shouldn’t use it. Here are some reasons that your church MUST NOT Twitter:

All that being said, I’m actually quite impartial to whether you decide to use it or not. Anthony’s review is obviously slanted to those that already “understand” the culture and doesn’t provide as much support for the fundamentals of social media engagement, etc. but that wasn’t his intent (it appears).

For those that are in the know, it’s already obvious.

But for those that are hesitant and need some more education about it, take a step back. It’s ok. It’s not important that you use it instantly or today; it’s more important that you understand it’s power and it’s place in the online-puzzle of social interaction online.

So, take a second and think about it. I’ve found that Twitter and coffee mix well.

On one final note, Anthony’s a great guy and his heart is in the right place. Big ups to him for sticking his neck out and writing the eBook!

There are 50 comments already... Come join us!