Science Fiction & Biblical Reality: The Moon is an Egg

Before we get started, let me say that I have truly enjoyed this season of Doctor Who. Peter Capaldi did a great job, and I’m actually enjoying Jenna Coleman’s character a lot more. I feel like the two have a much better chemistry than Jenna had with Matt Smith, which isn’t intended to be a dig at Matt Smith. But enough fan boy blathering, time to get down to it.

“Kill the Moon,” the seventh episode of the current (eighth) season of Doctor Who starts off with The Doctor trying to undo some emotional damage he’d done by taking Clara and one of her students, Courtney, to the moon. They arrive in the year 2049, with the TARDIS materializing onto a crashing/landing space shuttle. Upon landing, The Doctor realizes that there’s a problem with the moon: it’s put on weight. The moon has gained a considerable amount of mass, increasing its gravitational force and causing massive destruction on the planet Earth, which is why these astronauts have been sent to the moon. They’ve come with one hundred nuclear bombs to destroy the moon.

Now, here’s where the spoilers kick in.

The Doctor tries to figure out how the moon’s mass could have increased so much, and, in his usual, usual way, he finds his answer. The moon, you see, isn’t a rock: it’s an egg. An egg that is hatching.

Lundvik, the astronauts’ captain, wants to proceed with the plan to use the nukes to blow the moon up. The Doctor is horrified at her desire to “kill the moon,” and Clara and Courtney share his feelings. In arguing the point with the astronaut, all three (The Doctor, Clara, and Courtney) state the moon is a living thing and that all life deserves a chance.

Doctor Who is a rather liberal television program, which makes sense given that it’s based in a fairly liberal nation as part of a liberal continent. (Of course, I’m saying this as an incredibly conservative American, so a grain of salt all around.) Beyond that, though, it’s a show that has consistently pushed social boundaries and norms in a genre (science fiction) that consistently does the same. Because of this Doctor Who routinely talks about controversial issues and frames them with a liberal point of view. The issue of sex, for example, has been consistently addressed since the first season. The character of Captain Jack Harkness took the discussion far beyond hetero, homo, or even bisexuality, since he is essentially what we could call an “omnisexual”—he’s up for anything. Politics were addressed when The Doctor deposed Harriet Jones, Prime Minister, which then opened up the door for Harold Saxon (i.e. The Master) to take over the nation. War and the military is constantly being addressed, especially in this current season where The Doctor’s distaste for soldiers has been center stage.

Given the above, I was set aback by the rather blunt and obvious pro-life undertones to this episode.

Let’s pays for an immediate disclaimer: I’m not saying that this episode was written as a pro-life/anti-abortion polemic. What I am saying is that whether they realize it or not, the writers of this episode placed some pro-life philosophy in The Doctor’s mouth. You see, even after The Doctor announces that the moon is an egg, a hatching egg, a hatching egg that’s about to release a brand new, possibly unique, life form, Lundvik still wants to destroy it. The Doctor, Clara, and Courtney all begin to argue in defense of letting the “moon” live. 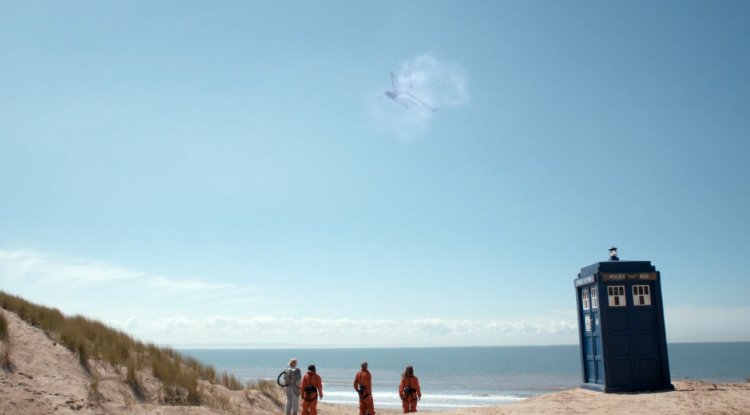 So, if the moon’s an egg and deserves to live, what can we say about an unborn baby? Let’s look at some basic biology. An unborn chicken—get it?—is called an “embryo,” which is the same term applied as a fertilized human egg. Oh yes! That’s right. Human babies begin as fertilized eggs, called “embryos,” just like for a chicken, which was the term applied to the embryonic “moon” by Courtney. From a biological stand-point, what difference is there between an unhatched chicken, an unborn human baby, and whatever it was that popped out of the moon? It sounds like The Doctor would argue that there is no difference.

How do you conclude a post like this? This is perhaps my least theological, least abstract post in this series. It’s so very simple: if we shouldn’t prevent the moon from hatching, why are we allowed to prevent children from being born?

If you’re a pro-choice individual, I don’t expect to convince you on this matter, but I do want to ask you, as you watched this episode, what were you telling Clara to do? Were you telling her to “kill the moon” or were you arguing that she should let it hatch? If you weren’t pushing for her to destroy the moon, what was your rationale, your justification for allowing this creature to hatch, even though this process was negatively affecting the Earth and could potentially have destroyed it? I hope these questions don’t come off as judgmental or moralizing; it merely strikes me as ironic that the stickiest argument for abortion—the health and safety of the mother—was presented in this episode, with the Earth surrogating for the mother, and yet it was viewed as not enough to justify destroying a life.

Something to think about.

My apologies to you if the title of this post ended up being a spoiler for you, but it’s too good to pass up.

[Featured Image via NASA/DVIDS | Image via ScienceFiction.com | Quote via DoctorWhoQuotes.net]

How To Be A Google Power User [Infographic]