ChurchMag / Creative / Is Patreon Right for Your Church or Ministry?

Is Patreon Right for Your Church or Ministry?

When I had just left university I had a discussion with my old youth pastor about Christianity, ministry and different forms of funding. He pointed out that you don’t have to go into ministry to be a disciple or serve God (I know, it’s obvious to me now but it was a revolution at the time) and that even if you do work for or have a specific ministry, you don’t have to fund it via tithing or raising funds like many traditional missionaries and ministries. Instead he pointed out several different forms of funding that have been used by Christians throughout time. These included:

I’m not going to discuss the merits or demerits of these different systems, but I’m willing to bet that most ministries you know focus on one of the first two forms. With that in mind, it is interesting that a service called Patreon has come along aimed at helping support people who are creating creative works.

We’re going to look at that service as well as some stories of people who are using Patreon, so as to help you work out if this service would be appropriate for you, your church. or other service.

Patreon was founded in by Jack Conte and Samuel Yam. The basic idea of Patreon is it is a kind of continuous Kickstarter. If you aren’t familiar with Kickstarter and similar crowdfunding sites like Indiegogo, the basic premise is that if there is a project you want to do, but need funds to help do it, you put up a campaign and people can donate money to help you reach that financial goal and achieve your project goal. People who make the campaigns can also offer different forms of rewards for people who donate different amounts of funds at the start.

This is a great way to test demand for ideas and help people with ideas which would probably never get a loan to help create. Many musician, film directors and artists have used services like this to fund their next creative project, but it doesn’t work as well for ongoing creative projects like podcasts, blogs, YouTubers or even missionaries.

That’s where Pateron comes in, instead of donating money once, Pateron lets you give money at regular intervals. This could be every week or month, or alternatively it could be every X number of new creations that the creator puts out (for a practical example every 10 songs a musician puts out). This let’s the creator give content away for free (or keep exclusive content for the Patreons) and not have to mess with advertising or other means of funding their activities.

Like Kickstarter, Pateron users try to give their backers some extra incentives for being their financial supporters, whether that be public recognition for their contribution, private communities, early access to new resources, or extra exclusive resources. Though some creators provide nothing extra with the simple recognition that their supporters help to make these resources free for everyone.

Here are some key things you need to know about Patreon when you compare it to alternative services.

So as you can see, you’re not going to get everything however from interviews with people like John Conte he has made it clear it is his mission to get as much money into creators hands as possible.

How Could You Use This?

Patron offers an alternative to the usually defaults of:

With Patreon, you have the option to give all your content away for free but keep it advert free by encouraging some people to support you. This is great for Christian groups who often want to help as many people as possible and get content into as many people’s hands as possible, but lack the funds to do so.

Alternatively you could offer content in a different format or in advance of non supporters. This would be another way to keep your content free to all, but still offer an incentive to support you.

Finally, you could offer extra exclusive content just for Patreon supporters or discounts on other premium content. This is great if you have books or courses and helps to offer a strong incentive to support you.

Stories from the Front Line 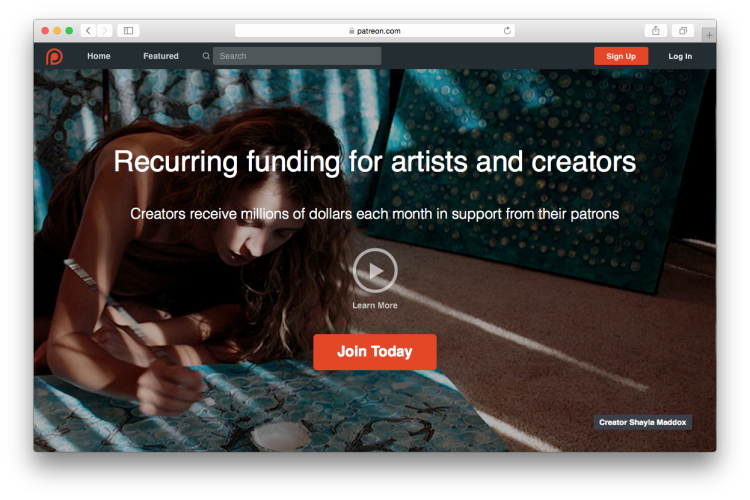 Because I have no reason (at the moment) to use Patreon I thought I’d reach out to a couple of Christians who are using it for themselves to see what their experiences have been. Unsurprisingly, results have been mixed. If you scroll through the lists of creators, you’ll come across many which have no patrons whatsoever. This isn’t exclusive to Christians, but to everyone on there. So if you were hoping to just put up a page and make money, forget it. From the stories I’ve heard, there are three factors that are highly important.

Dorothy Greco started using Patreon about a year ago when she shifted from pastoring in person to through her writing.

She posts regular updates (at least every other week and often every week) and has 24 patrons spread across five different reward levels. Most interestingly, only one backer is supporting Dorothy at her lowest level.

I asked Dorothy if she had found Patreon to be useful?

“Absolutely. Though it’s not uncommon for some of the supporters to skip a month (or two), the income stream has not dried up. While we can’t pay our mortgage on what I make from Patreon, it has been a huge blessing and allowed me to pursue writing more than I would be able to without it.”

Nate Cunningham is a guy I first came across on Google+ who hosts religious video discussions aiming to generate civil discourse about christianity. He has been doing this for a while and has quite the following on Google+. As soon as I saw him on Patreon I reached out to find out what his experience had been:

“I’ve used Patreon for about three months now after a friend told me about it and I decided to give it a try. This is the first service of it’s kind that I’ve tried and I like how it pays monthly, instead of all or nothing in one lump sum.”

Nate’s experience of Patreon hasn’t been the shining example you might want to put first. He so far only has two patrons (contributing $30 a month) despite his large following and great content. However, there are a couple of aspects he isn’t doing.

“I don’t post updates. I initially set up everything, and let it run itself from there. I don’t offer any rewards, because I just haven’t come up with anything to offer yet (except my sparkling personality). I would offer rewards if I could think of anything good.”

My personal opinion is that both Dorothy and Nate are producing great content, certainly better than some of the creators on Patreon with no supporters (though I can’t say for certain about every member), but the key difference appears to be in updates and rewards.

I asked both Dorothy and Nate what advice they’d give to anyone considering Patreon. Here’s what they said:

“Finding folks to support me took a bit of work. I did many direct asks, but almost all of them said no or never even responded which felt super awkward. I think nearly all of my supporters have come after I randomly post on Facebook and invite folks to partner with me.” – Dorothy

“My advice would be, make videos, show your personality in video rather than text alone.” – Nate

There are many many creators who have no backers whatsoever. Zero, zilch, nada. In fact, probably the majority don’t have any supporters. That’s not too much of a surprise really. Patreon is not a place to build a platform, it is a payment place. I’m sure people did use it as a discovery network at first, but now it has become crowded and so trying to stand out there is difficult. If you are hoping to create a page and watch the supporters come, sorry to tell you, but it isn’t going to happen. Instead, the most successful groups on Patreon have large followings already and use Patreon as merely a tool to get paid.

Another point is they also offer strong incentives for people to sign up and support them. Exclusive content and multiple tiers are a must.

There are other services which offer different variations on forms of giving funds to ministries that may well be worth checking out for different reasons.

You can check out some of articles on Online giving services.

Patreon is an ongoing giving commitment and lets be honest, most people don’t like ongoing monthly payments. There’s something about monthly payments which is more annoying than a yearly payment or a one off payment. Well with a service like Indiegogo, you could run a one off campaign to raise funds. This provides a great sense of urgency (like Public TV or radio fund drive) and has a set point to give at or not which can help people make a decision. Of course, you wouldn’t get a reoccurring income from it but it is an alternative option.

How could your church or ministry use Patreon?

If you’d like to support Dorothy link or Nate link go and check out their Patreon pages.

What I Learned Building a Pallet Set (And How You Can Too!)