I woke up this morning in Italy, to find a tsunami hit on the other side of the world following a 8.9-magnitude earthquake.

Where did I hear about Japan’s earthquake and tsunami first?

I followed one of my Twitter links and watched a video of the tsunami hit.

I went to Google to look up a news article about it, and found Google had displayed a warning that said:

Tsunami Alert for New Zealand, the Philippines, Indonesia, Papua New Guinea, Hawaii, and others. Waves expected over the next few hours, caused by 8.9 earthquake in Japan. 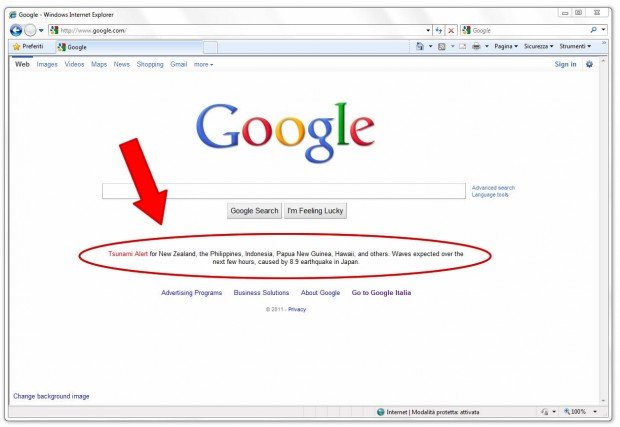 I clicked on a news article in my search results and got the facts from CNN:

An 8.9-magnitude earthquake hit northern Japan on Friday, triggering tsunamis and sending a massive wave filled with debris that included boats and houses inching toward land.

The number of fatalities was unclear, but Japan’s Kyodo news reported at least 10 killed and numerous injured.

The quake prompted at least 19 countries and numerous Pacific islands to issue tsunami warnings. It was followed by powerful aftershocks that were felt in capital of Tokyo.

The days of, turning on the TV and letting the news come to you “Right after this commercial break”, are over. In just 4-minutes, I found everything I needed to know, and my news trail started with social networking.