ChurchMag / IT / Net Neutrality: The President, the Lobbyist, and the Elephant

Are you tired of hearing about “net neutrality”?

I get e-mails every other day from some of the organizations organized to keep the Internet free and open, and while I truly appreciate their effort, it’s getting a bit old. I feel like I’ve been stuck in a constant crisis mode, researching net neutrality and over governmental issues—I’m very political, sorry—and I’m ready for the government to stop screwing things up and stick to what it does best: getting nothing done.

The President—Finally Trying to Lead

On Monday, President Obama announced his opinions on the subject in a post on Medium, entitled “My Plan for a Free and Open Internet.” In his plan, the president is pressing the Federal Communications Commission (FCC) to “reclassify” the Internet as an essential form of public communication, like radio and television, which would give them full regulatory power and would effectively prevent Internet service providers (ISPs) from throttling or censoring your Internet access.

Four Rules for a Free Interweb

Beside the above video, the post outlines four rules that should be followed in order to keep the Internet free and open:

While I agree with all the president’s points and applaud him for making this proposal, I have to say this: It’s about darn time, sir. The Internet has been going crazy over this—and I mean, really crazy, cat GIF crazy—for some time, and we’ve been asking you to step into this mess to offer some…what’s that word…leadership?

What were you waiting for? An e-vite?

Of course, just because the president spoke up doesn’t mean that the fight is over. You see, there is someone else that is standing in the way, sorta.

Technically, Tom Wheeler’s title is of “Chairman of the Federal Communications Commission,” but to me, he’ll always be ol’ Tommy Wheeler, former president of the National Cable & Telecommunications Association and former CEO of the Cellular Telecommunications & Internet Association. What that means, dear reader, is that the head of the FCC, the organization we’re asking to reign in, restrict, and regulate ISPs, used to work as a lobbyist on their behalf.

That’s like tapping an enforcer for a drug cartel to lead the war on drugs! 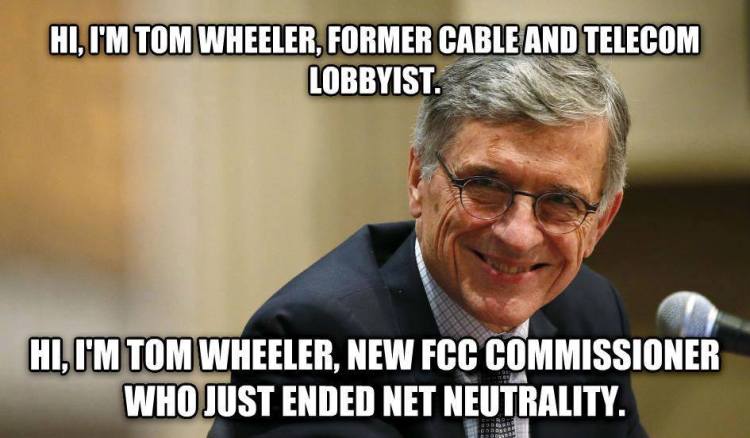 Appointing someone like Wheeler to be the commissioner of the FCC is beyond stupid. It’s basically an implicit statement of supporting his policies because—oh yes—many of the policies that the Internet is vehemently opposing were proposed by Wheeler himself! Clearly, this guy is very much on the side of the ISPs and working in their interest, despite the considerable resistance to it voiced by the engage citizenry of the US. Who would have appointed such a corporate shill to head such an important public position?

The Elephant in the Room

Here we come to the point that really infuriates me. You see, time and again, the president has refused to truly lead the government, the country, or even the national dialogue on various topics. (Sorry, if that was a bit too far afield. My frustration with some of the president’s policies pales in comparison with my distaste for his weak, ineffective hands-off, “not my job” attitude towards actually doing his job.) One of those topics is net neutrality and the FCC, specifically. Both the White House and President Obama consistently refer to the FCC as an “independent agency,” distancing himself and his administration from the agency and its decisions. While the FCC does function as an independent agency, it’s still a part of the federal government, and as such, it receives its authority from that government. In fact, it is the job of the president to appoint and the job of the Senate to confirm the commissioners of this “independent” agency. Claiming that an agency is “independent” when you pick the individual who heads that agency is more than a bit deceitful.

Even though the president and Wheeler are both Democrats, there is a huge elephant in the room, a massive truth that the president refuses to admit: he appointed this chairman, and, theoretically, he could appoint a new one. It’s never happened before, but that doesn’t mean that it can’t happen. Now, I don’t think Wheeler could be fired straight out, so essentially, the president would just tap one of the other commissioners and make them the chair of the FCC. What’s the worst that would happen if he tried? Well, for one, Congress could block it, which wouldn’t be surprising for a number of reasons—ISPs are lobbying Congress (i.e. Wheeler’s old job) and the Republicans would love to fight the president on pretty much anything involving more government regulation). But let’s pretend that Congress decides to the back the president—what else could go wrong? What would the president stand to lose?

It’s not as if he needs Tom Wheeler to campaign for him in Iowa or to raise another half a million dollars for another reelection campaign. Yeah, that actually happened. Before Tom got his job at the FCC. Are we seeing some issues here?

President Obama has outlined a great plan here, a plan that many have been asking him to back for months. His slowness to act, his continual distancing himself from his own appointee, his poor judgement in appointing Wheeler in the first place, and his passive refusal to apply any real pressure on Wheeler reveal just how little he truly cares about this issue. It would seem to me that despite his post today, we are effectively on our own.

I am concerned about the Internet, but I’m more concerned about he future of the US. Politics is getting more complex, more corrupt, more ancestral. There seems to be no way to clean it up, as the candidate who offered us the most compelling image of change in decades has turned out to be just as much of a politician as those he campaigned against.

What do you think about any of this? Net neutrality? The president’s plan? Tom Wheeler’s conflict of interest? 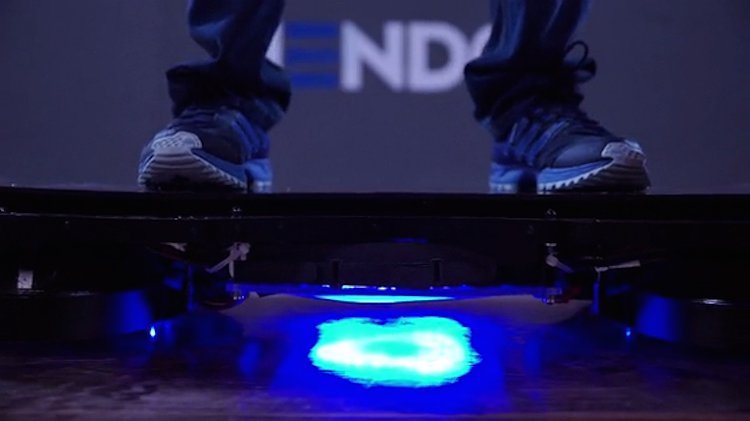 Have You Tried Google Helpouts? [Infographic]