So your company or ministry is using Twitter, and you have an event coming up. You plan ahead and announce an event hash tag, like #GreatConf. People start using it, but you want to encourage more participation once people arrive. Somebody suggests that you show the tweets on big screens at the event, which seems like an easy enough task.

Well, let me qualify that. It’s not as easy as you might expect.

To do Twitter conference projection well, there are three things to consider when you’re planning to project a feed on screens that will be seen by dozens, hundreds, or thousands of people:

The text of each tweet needs to be large enough to be read. And if you really want to drive engagement, it’s also a good idea for the avatars to be large enough that people can have the “hey, that’s me!” moment. And don’t forget that your Twitter users may want to meet each other during the event–another reason for having decent-size avatars.

I’m a huge fan of HootSuite for managing my company’s social network activity. It’s simply fantastic, and if you’re managing multiple social networks, you really should give it a try. One of their ancillary features is the option to turn one of your ‘streams’ (columns/feeds) into an embeddable widget. Unfortunately, the widget isn’t easily customizable, and thus fails the readability test for Twitter conference projection. The text is just too small.

Customization isn’t imperative in all cases, but it becomes important if the solution you’re using wasn’t designed specifically for large-screen use.

A fairly static Twitter feed (one that refreshes only when you refresh the page) may be fine for your web site, but it’s not a great solution for displaying your Twitter feed at a conference.

Imagine leaving the static feed on the screen for 1 minute, hoping to drive engagement. Then your conference display continues displaying your other announcements, and comes back to your Twitter feed perhaps 3 minutes later. In that time period, you may have had 20 new tweets, only about 12 of which you’re displaying on your static feed. Not only is the feed fairly boring to look at, but also your guests quickly learn that they have only about a 50/50 chance of having their tweets seen on screen. Bad idea.

Choose a solution that scrolls or refreshes. A fancy animation is nice, but the important thing is to keep the feed moving, to give it a sense of immediacy, and to optimize the number of tweets you can show. A basic scroll or auto-refresh is sufficient.

There are three basic options for moderation:

No Moderation: Not an Option

In most venues–particularly conference venues–it would be unacceptable to allow profanity on the screen. As remote as the possibility is that somebody’s going to stumble upon your unique #tyru88i hash tag and use it to hijack your feed (for spamming or just to mess with you), none of us wants to risk our jobs over this. So I’m assuming “no moderation” is out.

I tried full moderation for a men’s conference in 2010. There are multiple ways to do it, but I used Twitter’s own “Faves” widget–which is animated and customizable–to show only the ‘favorite’ tweets of my ministry’s Twitter account. I used a Twitter client on my phone to ‘favorite’ the tweets as they came in. This option works, and may be viable for small events. But it’s labor-intensive, and if you can’t stay on top of it, you’ll kill participation.

Mixed moderation is the best method for many events.

There are some services that do only basic auto-moderation, such as only using a profanity filter. One such service is http://wiffiti.com, although they do offer full moderation too, if you contact them.

While a profanity filter is a nice feature, it’s often not sufficient. Do you really want to be projecting tweets like “The speaker in session 4 is awful,” or “I can’t wait for this conference to end?” It’s helpful feedback, and yes–it’s already public and impossible to hide. But there’s little reason to proactively and publicly display that kind of content to your guests.

I prefer both auto-moderation and manual moderation in a single system. That way I don’t have to be glued to the feed in order to make it work; but I’m also not completely at the mercy of an automatic filter. After all, if even one “bad” tweet gets through the filter, I may have to turn the entire projected feed off.

After considering the three issues listed above, and after a fair amount of research, I came across a solution that’s both affordable and effective: TidyTweet + VisibleTweets. 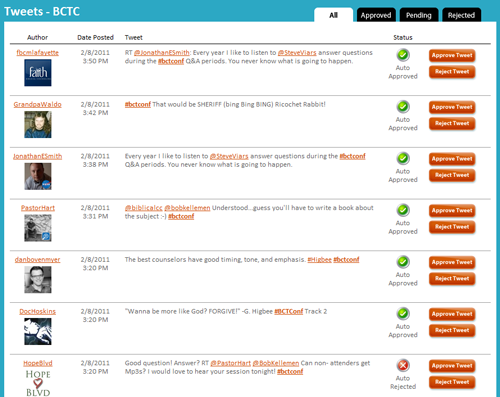 For a mere $10/month (ridiculously affordable for a single conference), TidyTweet (www.tidytweet.com) lets you moderate a single hash tag. Their moderation options are fantastic. In fact, I don’t know of anybody that comes close to this feature set.

Even if you use the auto-approval option, you have manual override capability.

(It’s worth noting that the same day I wrote this article, my hash tag driven TidyTweet feed started displaying tweets that didn’t even include the hash tag. I originally thought it was TidyTweet’s fault, but it turns out the Twitter Search API went haywire that day. That’s a good reminder that anything other than manual moderation does carry risks.)

As great as TidyTweet is at moderation, its own display options do not meet the customization/animation needs mentioned earlier. For now, the best option is to take advantage of their partnership with VisibleTweets, by which you can plug your moderated feed into a decent display. 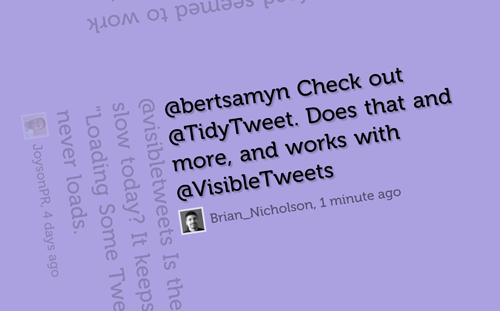 I’d like additional customization options. For example, I don’t like the fact that the background color constantly changes, and I’d like the option to make each tweet fill more of the screen. I’d also like to see an option to include pictures that people uploaded when tweeting–a feature offered by some other services.

While VisibleTweets does accept a TidyTweet feed, it doesn’t require one; you can test it out here.

Other Solutions to Consider

Wiffiti (www.wiffiti.com) offers basic auto-moderation in its free version, and has a decent display. Perhaps its standout feature is the option for even non-Twitter users to get involved, simply via text messaging. Considering that text messaging remains far more popular than Twitter, especially among teens, this option may be ideal for some events. The free version is easy to configure, but you must contact Wiffiti for advanced features such as manual moderation. 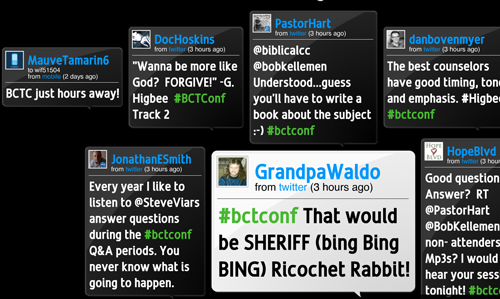 Twubs (www.twubs.com) lets you set up a micro-site built around a hash tag. Twubs offers a display built for conferences; but from what I could tell during testing, it requires full moderation. It’s also possible that the service was just flaky, or that I wasn’t smart enough to figure it out. If you do figure it out, I’d love to know what you think of it. 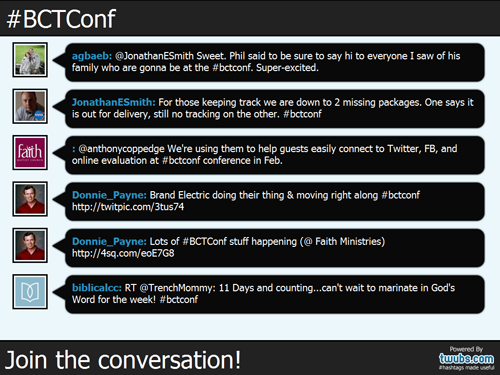 If you’re not opposed to paying more money or using an Adobe Air application (I needed something that could run in a browser), there are other viable options out there. For me, TidyTweet + VisibleTweets was a great solution for my needs. What have you used, and how well do you like it? 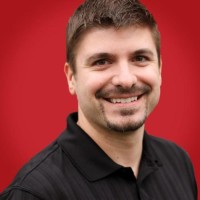