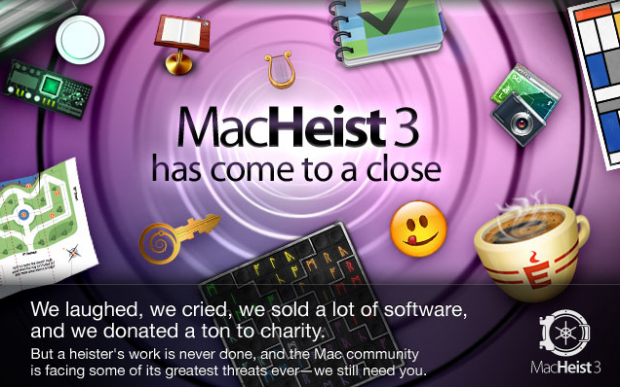 About a month ago I bought a $40 bundle of software and desktop apps from MacHeist.

Honestly, I didn’t really need them, but their campaign and strategy was far too compelling. A few moments of thought (and justification) I ponied up the coinage and dropped it like a bad habit.

And thus I contributed to helping MacHeist break every single sale record they’ve ever had, selling more than 88,000 bundles and raising nearly 1,000,000 dollars for charity. I joined a community of Apple and Mac fans that were, well, fanatical about their computers, the applications they run, and a community who loves to have a good time.

MacHeist was on a mission. I gladly joined, bought in one hundred and one percent, and contributed.

I learned a lot by watching them and I think there’s much more that can be gleaned, even if we just take a shallow look into their strategy. Phillip Yu, one of the founders puts it this way:

We were perfectly sober when we came up with the idea. It’s really weird, but we’ve all had interest in crafting entertaining experiences … and we found a way to make [a software sale] actually fun and exciting.

This was their 3rd joint, with 2 previous years of success. MacHeist, most simply a series of “online missions,” challenges participants to complete each stage with unlocks access to free Mac apps. The difficulty of the puzzles oftentimes encourages collaboration within the community in the forums.

Ultimately, of course, the point and purpose is to promote their bundle. Business modeling 101. It’s true genius though, tying mission with their core business, and not just a “Mission Statement” but actual missions.

John Casasanta, one of the other founders, puts it this way:

If we got rid of missions, we’d probably make the same amount of money, but a big part of my soul would be killed. People love what we do, and people are so passionate that they’re addicted to it — they go through ‘MacHeist withdrawal.’ That’s the best part.

I think we need to take a little bit of MacHeist when we begin to think creatively in how to reach, engage, and leverage community passion and purpose. In fact, we are already a community of purpose, why aren’t we as unified in our approach as we could be?

‘Free’ is How the Church Leads Online