ChurchMag / Web / Communication / What the Church Can Learn from Google

What the Church Can Learn from Google 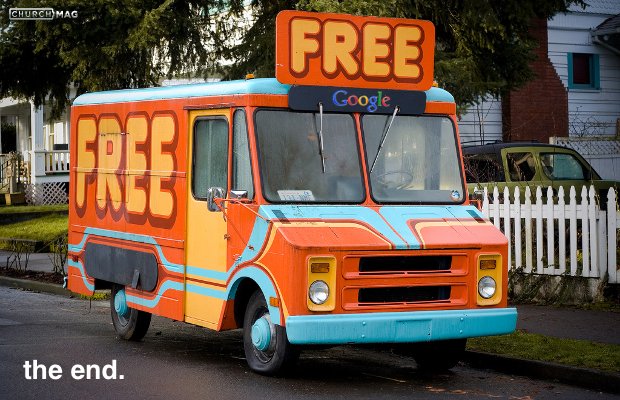 So, in case you’re been under a rock or just got back from partying outside the Vatican, Google has announced its plans to euthanize Google Reader in July. The fury has begun to die down on social media, but rest assured, those who were hard core users of Reader won’t forget this anytime soon. One Tweet that I saw—sorry that I don’t remember who wrote it, though I’m sure several thought along the same lines—threw Google’s unofficial motto back in its face:

What happened to “Don’t be evil”?

I think what’s most frustrating about Google’s decision to shut Reader down is that so many were hooked by this service only to be cut free without any recourse. It’s like catching fish and releasing them—what’s the point? It does seem a bit deceitful of Google to promote this free product of theirs, make it (arguably) the industry leader, and then shutter it with only four months warning. True, Reader is Google’s product to do with what they will, but it’s a bit like offering everyone at your office lunch every day for several years. You bring in the best food, create the best atmosphere, make all area restaurants pale in comparison…and then just tell everyone that you’re not going to keep it going.

The venerable Chris Wilson* made a great point the other day in his take on Reader’s demise that I will now paraphrase: Cutting Reader frees up Google to develop the technological developments of the future. Chris is entirely right in his assessment of why Google did this and why it might be a good thing for us in the long run. However, the real damage done here isn’t that Reader is gone or that RSS is in decline. The real problem is that no one is going to ever trust Google as completely as they once did.

The Church and Bait & Switch

The Church of today often gets a bad rap for the Church of yesterday, though, in fairness, many of the same people are in charge. I don’t know what you experienced in junior high, but a good many of my religious experiences were, to some degree, based upon the tried and true “bait and switch” technique.

Allow me to demonstrate:

Hey, kids! Check out our haunted house! It’s totally free! Prepare to have Hell scared out of you!

[Insert scene of domestic abuse, eating disorder, drunk driving scene, etc. all leading up to a ‘literal’ trip through Hell.]

Now, it’s time to watch a highly stylized crucifixion scene, complete with strobe lights, and fully costumed demons. Afterward, a preacher would like to talk to you about Jesus.

Of course, there’s nothing wrong with doing a “heck house” or whatever, but many times, these events make us look less than genuine. How many times did you invite your friends to a youth group “pizza party” that just happened to be taking place after a two-hour evangelism service, complete with a human video to Creed’s “Higher”? Oh…so..it was me?

If you hold enough of these events, people will begin to see you as disingenuous and manipulative. So, what does that have to do with Google? Well, imagine that your church developed an amazing event or charitable service. You spent years promoting it, developing it, and making it indispensable. And then, you cut it. The effect on those who had begun to depend upon you would be devastating.

Now, before I get some angry comments, let me say that there certainly are times when you have to cut out something that your church (or multi-billion dollar company) is doing. However, I would suggest that there are better ways to do it. If you’ve been serving these people for years because your care about them (or at least your brand), then show them that care and concern by helping them transition to a new service or provider. Google could have easily tapped Feedly or any one of another services to act as Reader users’ lifeboat. For that matter, Google could have sold or even given Reader away if they didn’t really care about holding on to it.

Let’s get real here. My church has been hosting my town’s fireworks celebration for several years. We do most of the leg work, front ninety percent (or more) of the cost, and spend nearly six weeks each year prepping and then cleaning up afterward. Clearly, it’s a huge investment, but honestly, we love doing it. However, at some point, maybe after a decade, we might be forced to cut it. It eats up nearly a sixth of our calendar, costs us about $5,000 to pull off, and drains our staff and people physically and emotionally. Last year, we started to get a glimpse of what might force us to stop doing the fireworks. The economy was weak, and we weren’t sure how well we would do with selling concessions. (We sell food to reduce the damage done to our budget, but even if we do well, we still lose money.) To safeguard the event, we partnered with one food vendor (an ice cream truck) who agreed to pay us a percentage of his profit, which also freed us up from having to serve ice cream in July—not easy. It’s very likely that, over the next few years, we’ll continue down that same path. At some point, ten or fifteen years from now, our financial involvement may well be under fifty percent, but at least the event, which serves over 10,000 people every year, will continue.

Ladies and gentlemen, Google has decided to stop serving us a free lunch. Let’s not make the same mistake in the Church.

*I would like to point out that I was working on this post when Chris’ went live, so please don’t read this as a response or rebuttal. 🙂