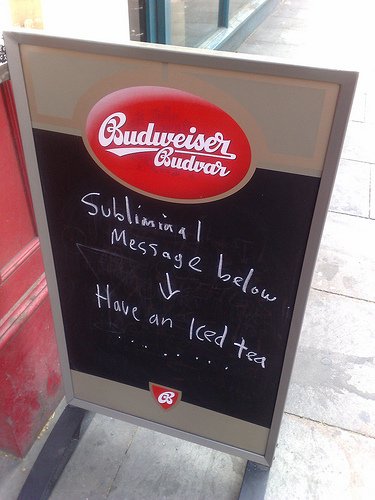 Start by watching the above video. Done?

Pretending for a minute that Kevin Nealon wasn’t joking, what was the primary message that you heard in that video? Was it that Nealon loved being on The View, or was it that he wanted to get out of there as quickly as possible?

It seemed to me that he would rather be hanging out with Medusa.

Again, Nealon certainly was joking about his dislike for The View, but here’s the point: although his sentences together built a positive description of the show, he inserted “subliminal” messages that told another story and told it more loudly.

Not Just Words on a Page

Hipps references Nealon’s famous Saturday Night Live skit in which his character, Mr. Subliminal, gets what he wants through the use of subliminal messages.

[For the record, I tried to find a clip online, but the best I could come up with was a Spanish version, and I’m pretty sure it included some Spanish profanities. Until I caught on to the word choice, I was definitely going to send you to that video, too. The best I could do was the video above, which is also sorta funny.]

Hipps explains that, in the same way, the medium through which we receive most of our information, the printed word, communicates under-the-surface messages.

Shane describes those messages as having three main characteristics: moves toward individualism, toward objectivity, and toward abstract thinking. As cultural values become communicated more frequently through print than through speech, our behaviors change.

You Gotta Get It

In my opinion, these changes are not necessarily bad, and I believe that Hipps would agree. For example, he describes his use of abstract thought as helping him in tense situations with his wife. By journaling his thoughts, he avoids lashing out with confusing and harmful words. In this way, I don’t think that Shane is condemning our use of print media or our other forms of communication; instead, I believe he simply intends (in this chapter and really throughout the book) to bring understanding to our practices so that we might best use the tools we have.

I would sum it up like this: understanding precedes ultimate usefulness. Until we understand better the media which we encounter (and the subliminal messages which they communicate), we are severely limited in our ability to use them for the Kingdom.

Get It? Now Get Over It

But how does this happen? For starters, awareness. Simply put, we should pay attention to our communication. If we are not attentive, those sneaky subliminal messages will transform our message entirely.

How do we hush the increasingly loud undertones of our culture’s communication? Hipps discusses that question throughout the remainder of his book, but I’d love to hear your thoughts on this, particularly if you disagree with any of Shane’s statements throughout the chapter. Otherwise, what kinds of other things do you think our culture has lost as a result of our move toward the supremacy of words on a page? How can we possibly regain those things? More importantly, how else can we prevent ourselves from being influenced too greatly by these under-the-surface messages? (Oh, and go back and re-read Lon’s thoughts on Chapter 4. Lots of relevant points there.)

Until next time (never), I look forward to reading your comments (booo-ring). Thanks for reading (suckers), and be sure to stick around for the discussions on the rest of the book (it’s all downhill from here…)!

The Rise of the Mobile Church?