That was my first gut response.  And it was a deep response… starting down in my toes and working through my entire body upward as the feeling came wildly upward into my chest, out of my lungs and through my mouth into the open air.

Kontain, which recently launched is a flash-based blogging platform, and although my initial reaction still holds very very true, the thing does have merit and we should pay attention. 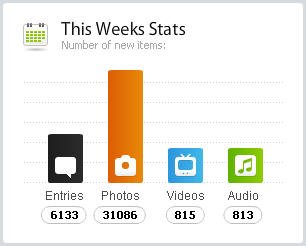 And here’s the big $100-dollar-winner reason why:

The reason we should be paying attention (Unifyer…?  wakey wakey…!) is because it’s built on a platform that has advantages that others, even WordPress, do not have.

It’s built from the ground for a particular techno-demographic (and future) that sports HD media as it’s playground.  Nothing has to be hacked together via plugins or widgets.  It’s all there from the start.

And if you’re a “product” guy, this should jive with you well.

You see, building a platform is a tough job.  And once you start, especially when the “core” architecture is built, it’s often times hard to change.  In fact, in many cases, it’s nearly impossible and would be much easier to start from scratch than do some ductape retrofitting.

Do any of these things come out of the box in your blogging platform of choice?  The answer should be a “no” (unless you’ve chosen Kontain as your weapon of choice).

If you want more to wet your appetite, just check out their roadmap for upcoming functionalities, which they’ve published as “Coming Soon” product developments.  It’s actually exciting, even for a “jaded” dev-guy like me.

So, even though I’m still asking why (because of the inherit issues with flash which I’ve briefly mentioned here in a post about Unifyer) it’s evolved into something more along the lines of “Why not…?”