The entire world has already heard the amazing and earth-shattering news that Facebook Connect has now been unleased to the general public.

Without question, these types of services, like the Google Friend Connect, will increase engagement.  The screenshot of the amount of comments on that particular test post for TechCrunch is living proof.

I mean, who wouldn’t want close to 1k comments?  A good read here by NYTimes can give a n00b a good overview. 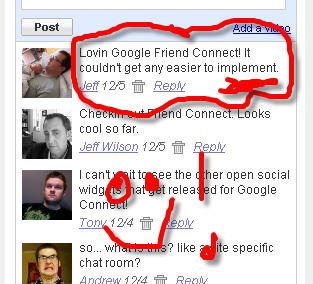 But here’s why I’m “crying”: it’s because the bar of implementation is too high, even for some of the lay-dev’s out there.  In fact, even for me, a seasoned dev-junkie, it’s to a point where I’d much rather gather a team to group-hug the API rather than solo-it like Van Damme (even though I could).

And see, that’s flawed.  It’s like providing the Gospel to a non-believer but saying that they have to jump through hoops to ensure their adoption.  Just wrong.

That’s why social api’s like Google Friend Connect will fare much better, in my opinion.  You can sign up, implement, and deploy in less than 5 minutes.  And if you’re already versed in uploading content to your blog then you’re a candidate for social++.

So, as we move forward and continue to dive deeply into developing social apps and services for the Church, is the adoption bar high or low?  Philosophically speaking, which one is biblical?

What are your thoughts?  I’ve already seen 20+ posts on extremely high praise (a few are “perhaps” a bit ignorant).  But I’m following the conversation.  Joe from MyChurch will be one of them.

Smarter Use of Technology and Advertising Please

CreativeMYK – An Artist Network and More