[Yes, we know DOOM is rated “M.” That’s because it’s violent and there’s nothing as intense and mature as visiting hell itself to serve up some sweet-sweet vengeance as you save mankind.]

Rebooted in 2016, DOOM is one of the best FPS games I have ever played — maybe even the best I’ve played.

First Person gaming is my favorite ways to play, but nothing caught my attention more than DOOM. It is easily the most satisfying FPS you’ll play.

I’ll be honest, it took me a while to warm up to the idea of playing DOOM. Before we dive in, let me briefly share the why and how of it.

Let’s face it, DOOM has a lot of baggage associated with it. Not only does it have the stigma of being the first violent video game to gain recognition in our culture, but it has demons and you go to you know where.

In fact, talking with my friends at church about the game, I felt the need to speak in more hushed tones. Talking about Fallout, Mass Effect, or Dishonored would not gain the kind of attention that DOOM would.

The more I thought about it, the more I realized that DOOM is actually one of the first Christian video games ever made. The object of the game is to not only defeat evil, but eliminate hoards of demons. It shouldn’t be rated “M” for mature, it should be rated “P” for Pentecostal!

I also do not enjoy games that are too scary. Horror is a genre that I will not touch for many reasons we won’t discuss here. Having played Dishonored, Bioshock, and Prey, I clearly do not shy away from games that have mature and intense elements. DOOM is not a horror game — but it can be fairly intense.

Ultimately, it was the Noclip DOOM documentary that finally convinced me to give it a chance (here’s the trailer, part one, two, and three).

Having played the old DOOM games, I wasn’t going into DOOM without any kind of previous references. I was a little unsure if the reboot would be nearly as similar as the beforementioned documentary claimed it would be.

I was impressed. I was hooked.

It’s safe to say that this DOOM isn’t just a fun callback to an old classic — it is something special all on its own.

From the opening scene, I was hooked.

Hell was waiting and it was fearful of what I was about to bring to it. 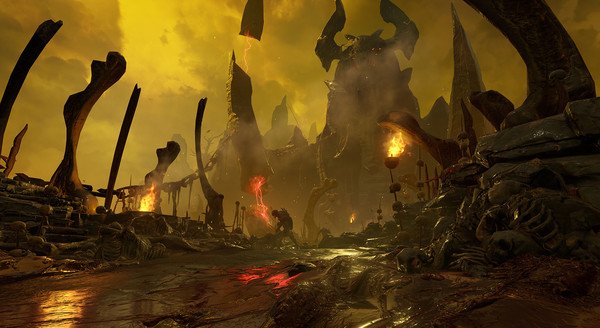 And that’s what made DOOM not scary to play. Are the demons and monsters gross, ugly, and scary at times? Yes. Are the environments full of “whoa” moments? Yes.

But as the DOOM Slayer, you are powerful.

These monsters of the underworld, these terrifying creatures that reside deep within the caverns of hell, they fear the power of the DOOM Slayer. 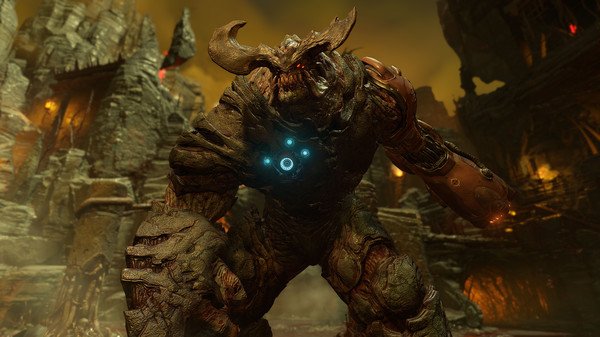 It was that forward motion gameplay discussed in the Noclip documentary that sets DOOM apart from every other FPS I’ve played.

The visuals and smooth gameplay are amazing on its own, but that always moving forward gameplay is what really makes DOOM special.

DOOM is so much focused on moving forward to the next kill that will supply you with needed armor, energy, or ammo, that there isn’t even a reload mechanic for your gun. 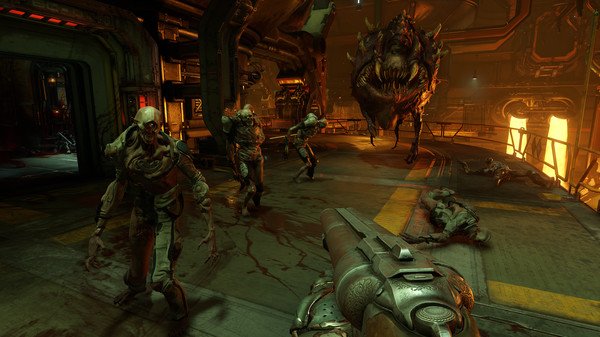 And like with any other ID Software title, the gunplay on the different guns is both amazing and rewarding. You not only will enjoy using all the guns throughout the level and hoard, but it’s actually an important mechanic as you strategize your way around the battlefield.

Strange, I know, talking about strategy with DOOM seems silly — but this isn’t just a mindless shooter. You’ll need to think through your every move as you quickly move around the map and you’ll want to consider your playstyle as you progress through the basic upgrade tree.

DOOM is the best of FPS. It’s unique in many ways and delivers a stupid amount of fun. You can usually pick it up on sale for around $10, which is an absolute steal for what you’re getting. With DOOM Eternal recently announced, I am now super psyched for it and it should increase the probability of some good sales on DOOM 2016.

If you’re not sure if the game is too intense for you, I recommend watching the documentary mentioned earlier (here’s the trailer, part one, two, and three). It covers a lot of ground, behind the scenes, gaming mechanics, and plenty of gaming footage.

If you’re sure it wouldn’t be too intense and you enjoy a good FPS, you need to play it. 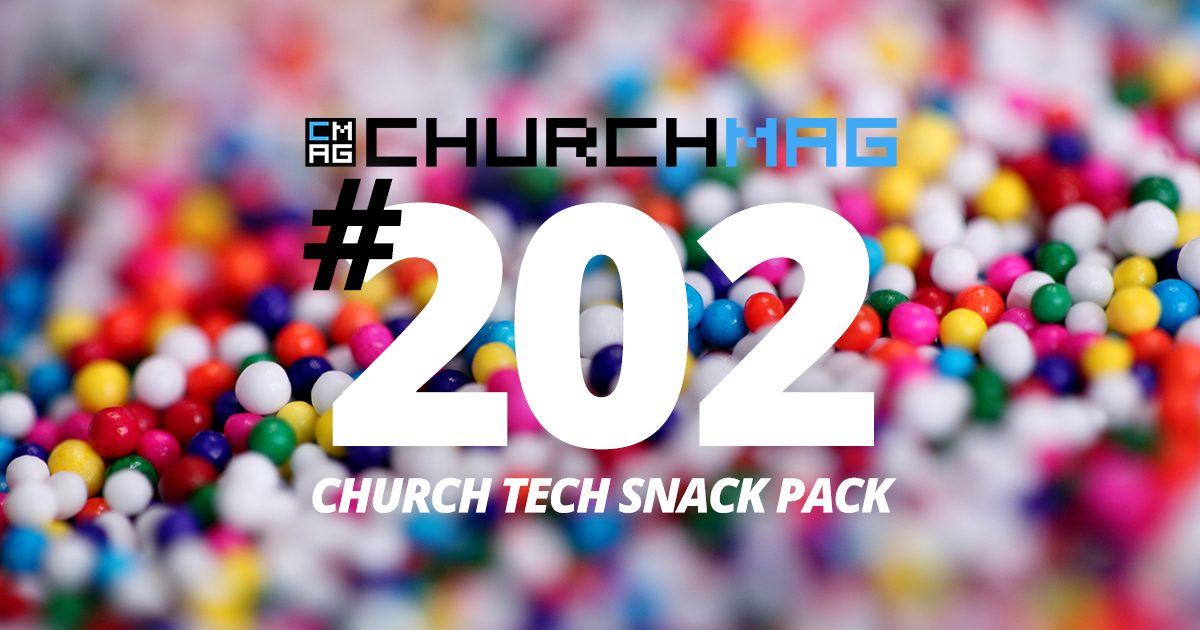 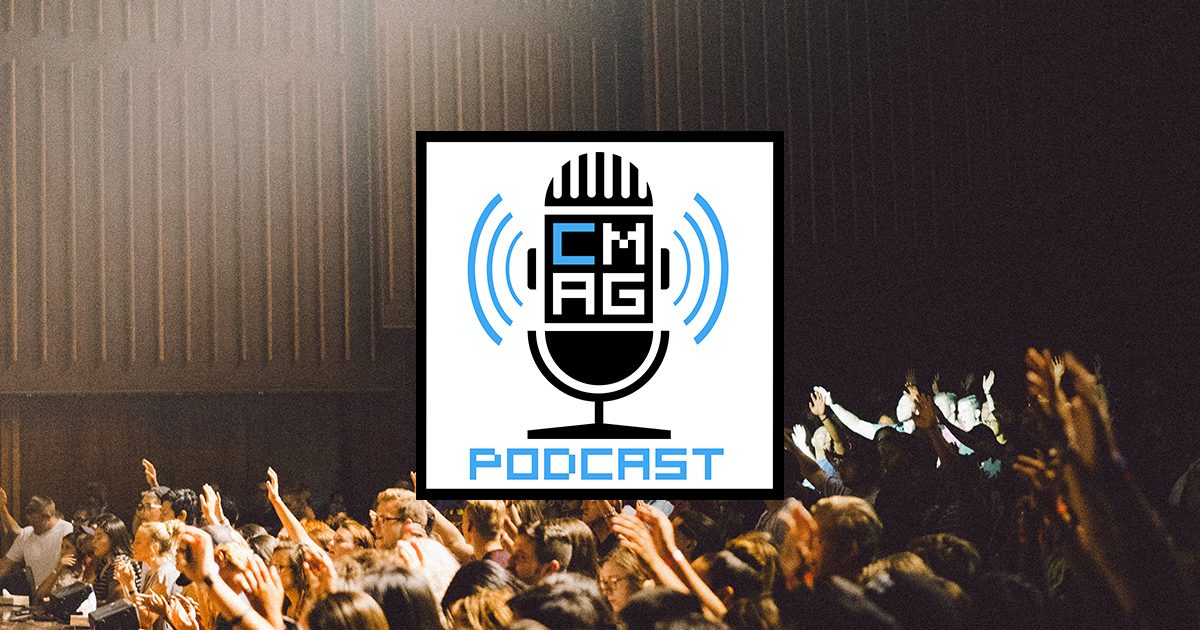