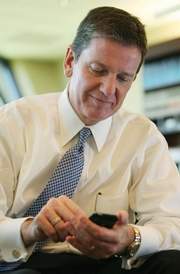 Starting out in any social network can be daunting; an immediate feeling of being “left behind” or “out of it” can instantly creep up on you. In fact, I know of enough people who haven’t joined a number of social media outlets just because they feel like they’re already behind.

That’s too bad, and for the most part, they’re wrong, although they are “behind” but only in the number of friends, which doesn’t really mean much.

That’s why it real “meatspace” friends matter, and should continue to matter. Take Michael Hyatt’s (@MichaelHyatt) example of promoting a new book by Andy Andrews, The Noticer.

Michael shared in an interview how Twitter could be easily leveraged for business:

A book we have on The New York Times bestseller list is Andy Andrews’ new book, The Noticer.

I started Twittering as soon as I read the manuscript. People asked me where they could get that, and I said it’s not out yet.

By the week we published it, just by using social media, we were able to get it in the top 200 on Amazon (to No. 28 of all book sales). This is a guy who has no traditional media platform. He’s not on TV. He’s not on the radio.

Wow. It pays (and works) to have friends in the Twitterverse.

Just remember to not forget your real networks that already exist; they can be leveraged effectively before you even join. And it doesn’t take that much to get the groundswell going.

Does Your Blog Solve Problems?