As we look at church social media policy, I’d like to share a pertinent personal experience. I’ve been on staff at my church since 2006, and in that time, I’ve been fairly engaged in social media. No big deal, right? Then, 2016 happened, and everything changed. I don’t like President Trump. I think he’s crass, narcissistic, and erratic. Feel free to disagree with me—that’s the benefit to living in a free, democratic society—I can have opinions you don’t like, and it won’t affect you at all. But there have been times when I expressed my opinions about the president poorly, and I offended some of my friends.

As a result, I apologized. Publicly. On Facebook. It was humiliating, but that is sort of the point of an apology. Humility is supposed to result. And then, after all of that, I had to go to my pastor and explain the whole thing to him because the person I hurt was a parishioner.

It was easily one of my worst moments of online interaction. I didn’t post anything online for weeks after, and I don’t think I’ve posted anything political—to Facebook—since then. (That’s why God invented Twitter.)

And while I haven’t softened my political opinions, I’ve come to realize, perhaps too slowly, that there is no benefit to debating politics or anything of consequence on social media. Feel free to disagree with me. I won’t debate you.

Instead, I’d like to challenge you to conduct yourself in the most Christlike manner, even if you do intend to engage in online debates. We’ll go through these tips, and then I’ll end this post with some wise words that my pastor has had to share more than once.

“If it is possible, as far as it depends on you, live at peace with everyone.” Romans 12:18

It is unbiblical to cause tension, to destroy harmony. Simply put: as a Christian, you cannot be the cause for others’ lack of peace. Recklessly arguing online, maligning the politics of others, or, worse, posting memes designed to “trigger” the other side is unacceptable. To debate policies in a free society requires “good faith” arguments. Anything less reflects poor citizenship and unChristlike behavior.

Winning an argument doesn’t equate to winning a soul. Nor is eternity built by “owning” our opponents with a sharp reply.

We can point fingers and blame each other for corrupting the discourse, but let’s be clear: it has been corrupted, debased. We no longer debate ideas or ideology. Instead, we malign the motivations of those on the other side, claiming that they are not “true Americans” or “real Christians.” This is not how we are supposed to engage in debate.

To engage in a civil debate, to do so in a way that aligns with Romans 12:8, we must begin by returning to our opponents their humanity. We must commit to seeing the image of God in them, whether they would acknowledge it or not. We know the truth about eternity, and everything we say or do should be done in light of that reality. Who cares about who they wanted for president if they haven’t acknowledged that Jesus is King?!

“Accept the one whose faith is weak, without quarreling over disputable matters.” Romans 14:1

We must also admit to ourselves that we are not God and cannot possibly have the correct answer to every question or controversy about life on Earth. As a Christian, I believe I know the single greatest answer to the questions of life on Earth, but I must regularly remind myself that I don’t know every answer.

And what I just said above gave me pause. I really do believe that Jesus is the answer to the questions of sin and suffering.

But I don’t want to say that in a way that seems condescending to those who don’t agree. You might think I’m “watering down” the truth, but Jesus never presented Himself in a way that was condescending to those who didn’t understand who He was. His approach to them as always loving, humble, and reassuring; and in this way, He disarmed their arguments and pretenses and made Himself known them.

Why should we do any different? Why do we believe that we have the right to lord our knowledge over others when even Jesus took the humble route?

The world can rightly say that we are difficult to listen to when we refuse to approach them in a manner in keeping with the example of our Lord Jesus.

And this goes double for when the argument is inside the Church. In these cases, we must be very careful and very quick to admit our own error.

Like I said above, I made a pretty huge mistake last year and offended a friend of mine. I made some political comments that they found personally offensive, and they told me so. Now, let’s be super clear: I still don’t agree with my friend, and he doesn’t agree with me.

But I had to apologize. He’s a friend, a brother in Christ, and I had no right to allow political opinions to be a source of tension in the body of Christ. So I apologized to him personally and apologized publicly. Here’s a screenshot of that post: 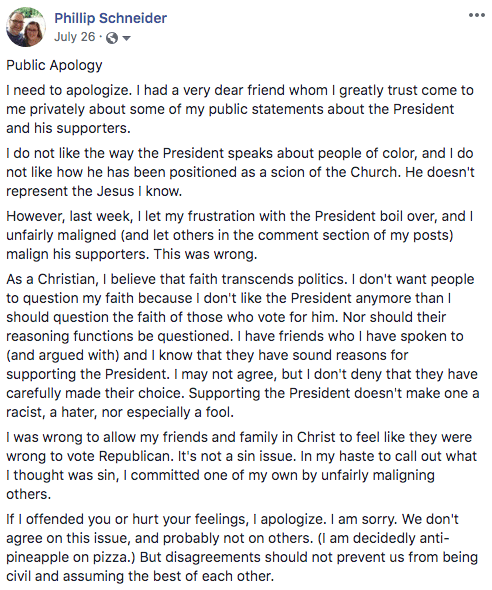 I did not enjoy apologizing. No one likes to admit that they were wrong, but I didn’t see any way around it. Of course, I didn’t look for one. I knew that I had offended someone that I cared about, that Christ cared about, and so the only thing I could do was to confess my sin and seek forgiveness from my friend and God.

When you offend someone—whether online or in person—apologize quickly. Don’t let offenses fester, especially when it’s a trivial matter of this temporal world and the person you’ve offended is a brother or sister in Christ.

The world outside of the Church must be constantly confused by how unloving we are to each other. We need to reverse this trend, shore up the bonds of the family of Christ, and present the world with a strong picture of the harmony of heaven on earth, even when we don’t agree about how things are on earth.

Given my own failure in the area of social media, I am struggling with how prescriptive I should be in these posts. I think I’ll save my hard and fast rules for a future post, but for now, I’d like to leave you with some wise words that my lead pastor has had to share with me a number of times:

“Don’t risk your pastoral witness in order to win a political argument, especially since you probably can’t win it anyway.”

Whether you’re paid staff or a volunteer or simply a Christian on the internet, why risk your witness to the eternal truth of the gospel in order to win a fight over some temporal fake news? I have serious concerns about the direction our country has taken and the knee-jerk support that large parts of the American Church are offering to the President, but I don’t want to risk pushing someone further from salvation because I was too concerned about their vote.

So, when it comes to how your church personnel manage their personal social media, I think you’re best to encourage them to live at peace, to make allowances for those who don’t understand or don’t think the way they do, and to apologize quickly. Above all: we need to make sure that we choose love over everything else.

If you really want to create a hard and fast system of rules, that’s easy enough: don’t post anything that you couldn’t share from the pulpit.

Is that incredibly limiting? Yes, but it’s also incredibly safe, and if you want a hard and fast rule, I imagine that safety is probably what you’re looking for here. A social media policy is a necessary guardrail.

In the next entry into this series, we’ll look at some firm guidelines your church needs for those who manage it’s social media presence. If you haven’t already, read the first post in the series, “Your Church Needs a Social Media Policy #01 – Why, here.

Do you have any personal experiences that speak into social media policy for church or organizations? Other thoughts? 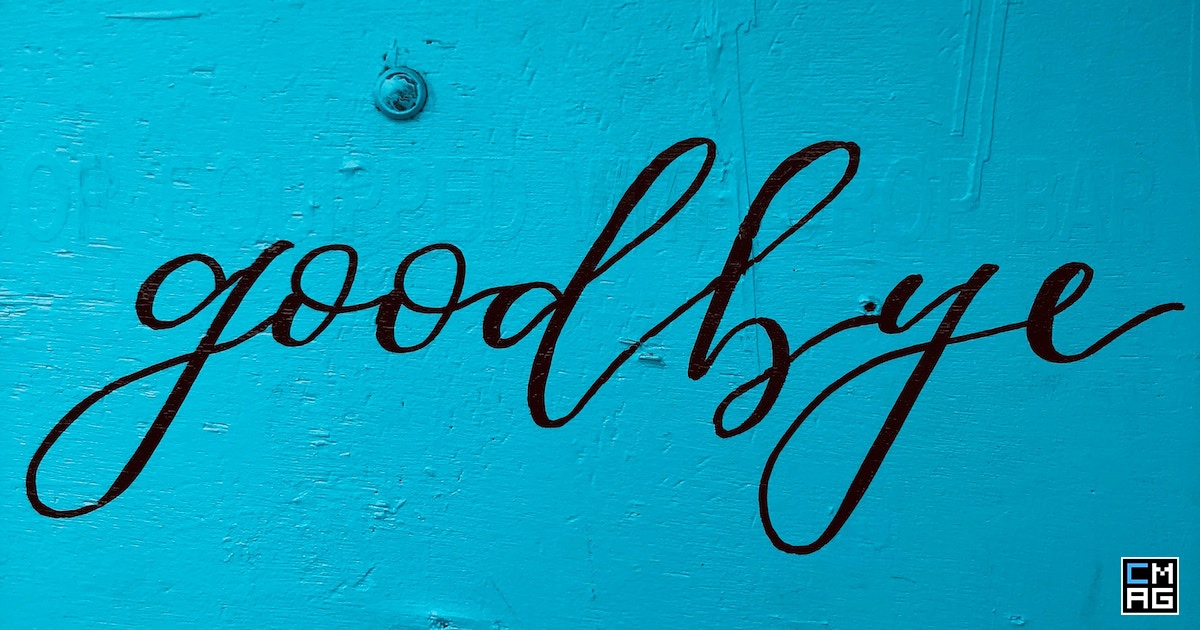 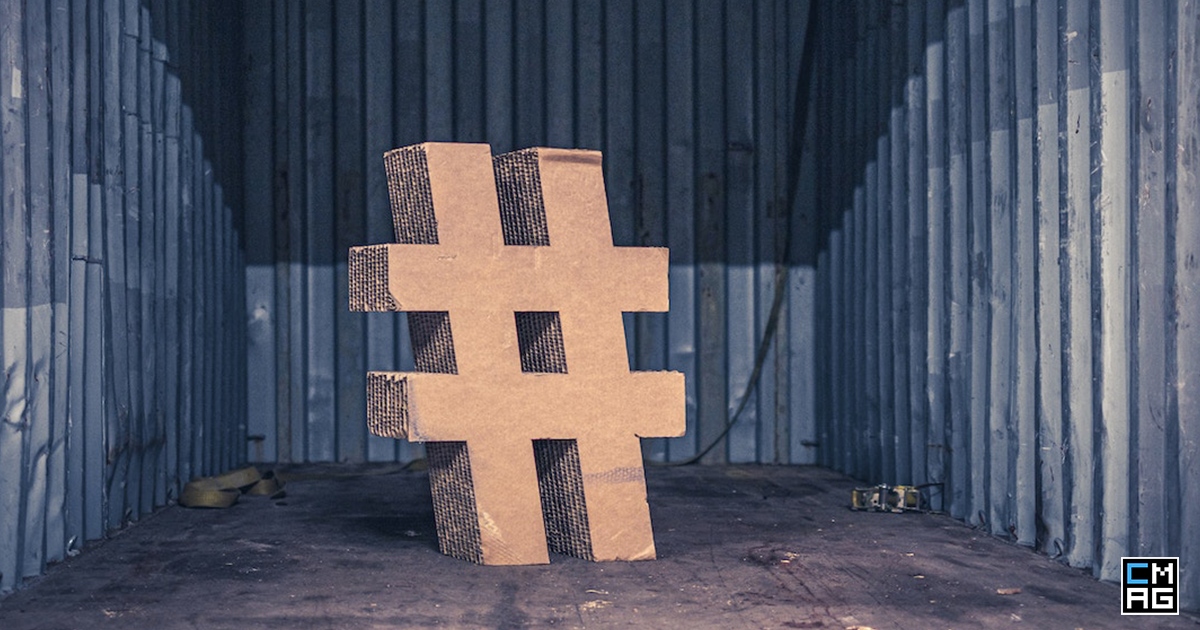