“You’ve got mail!” That’s one of the most recognizable phrases of the 1990’s, and it harkens back to a time when e-mail, instant messaging, and message boards/chat rooms were the focus—even the whole—of what the Internet offered. In this world of limited offerings, one company emerged with a plan to offer its customers—it’s “subscribers”—a safe, monitored slice of the Internet. Rather than face the World Wide Web unfiltered, subscribers would be able to access as much of the Internet they could ever want through the provider’s software/browser, sidestepping the risks that existed out in the wild. Picture a wildlife safari tour. The subscribers sat comfortably on leather upholstery in climate-controlled armored jeeps while the provider drove them through the “wild.” At any point, the subscribers would roll a window down and interact with the “wild,” though the door handles had been removed.

This approach to Internet Service Providing has clearly shown itself to be a failure. At some point, the subscriber will want to leave the jeep to encounter the Internet on their own terms, but the provider’s policy of removing door handles makes this impossible. Factor in the increasing unreliability of the provider’s jeeps—“Will it start today? How long before it cuts out?”—and it’s no wonder that this once powerful provider is no more. (Well, at least, not for much longer.) 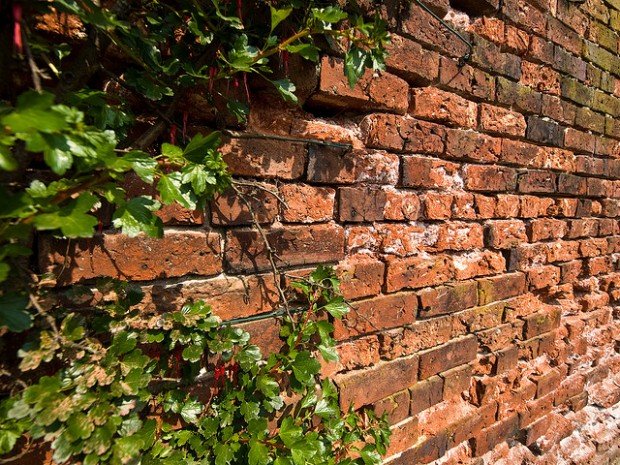 I’m, of course, writing about America Online (AOL). AOL’s “walled garden” approach to the Internet made perfect sense, initially: keep families safe from viruses, kids safe from pornography, and make the Internet easier to use. Looking back at my wildlife safari example, I can see some holes in the analogy. Yes, AOL would take you to the “real Internet,” but layered on top of it was AOL’s own version of the Internet. AOL set up its own system of e-mail, chat rooms, instant messaging, and message boards. What most people wanted the Internet for—AOL provided it right up front! It was simpler and safer for the subscriber, and incredibly lucrative for AOL…for a time.

Eventually, the Walled Garden’s trade-off of freedom for security and simplicity fell out of balance, and the walls ended up limiting more than protecting. Now, other companies are profiting from a highly modified version of AOL’s method. Facebook, YouTube, Google, and a host of other sites emerged as small, simplistic walled gardens but have overcome some of AOL’s failures by leaving gaps in their walls so that they are not entirely isolated from other gardens. In the end, AOL is a shell of its former self, begging other tech companies to buy it out. Creating a “walled garden” might be a great short-term strategy, but it inevitably leads to long-term disaster. The “safer” alternatives offered within the garden will eventually be overshadowed by the superior offerings that exist in either the outside world or other gardens. Clearly, such a short-sighted strategy will not lead to any laster success, and yet many churches have chosen this as their default model of ministry.

Many churches have appropriated the “walled garden” strategy for use as their primary model of ministry. They create a “walled garden” within which people may participate in safe, curated Christianized versions of regular activities. This is essentially what AOL did: they offered AOL branded and monitored chat rooms, instant messaging, and much more. Within the walled gardens of the church world, athletic activities and youth groups are provided for children and teenagers while civic celebrations, family-focused events, and other programs are used to entice adults. At the center of the garden, the hub of all these activities, is the local church, which is hoping against all odds that the “unchurched” will be snagged by one of these events/programs and be drawn into the church. The problems that exist within this strategy are many and complex. What follows is not an exhaustive evaluation of this method but merely a first look at what a “walled garden” church might have to look forward to. 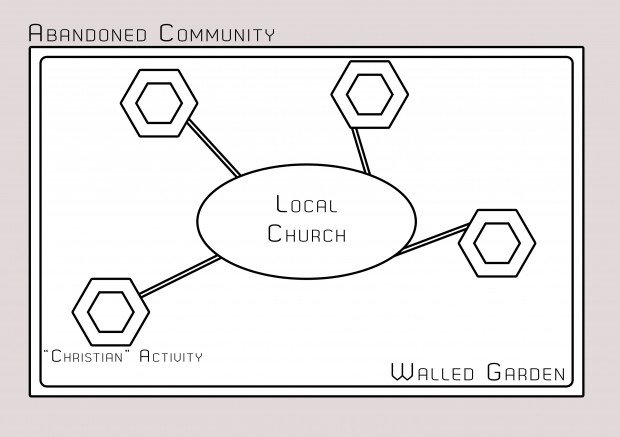 Subscribers in the Church

One of the first problems inherent in the walled garden approach to church is that it turns people into subscribers. People are brought into the church by appealing to their consumerist nature. “Our program is better” or “We have what you’ve been missing” are essentially Park Avenue marketing slogans that only work so long as they are true. However, as programs age, as new comparative programs emerge in other gardens, these same slogans might be less truth of this local church and might actually be more honestly applied to another church, another garden, across town. The subscriber, who attends, tithes, and maybe serves because they are receiving a service that they feel is worth it, will then leave. They have found a better service provider.

Many churches that attempt to build a walled garden are located in or around small towns. In many of these towns, there exists a glut of churches that compete for an increasingly limited population of church-goers. While most churches denounce “sheep steeling” and claim to be trying to engage the “unchurched,” their strategies belie their claims. The whole concept of a walled garden, of “safe” alternatives, is only attractive to a churched or at least pro-church individual. The truly “unchurched” and/or “anti-church” will not be reached by the offering of a slew of “Christian” alternative activities. The unchurched have no interest in attending a church’s “Trunk or Treat” or sports leagues because the “secular” alternatives are not offensive or frightening to them. In fact, in most cases, the secular offerings are less restrictive and better executed. 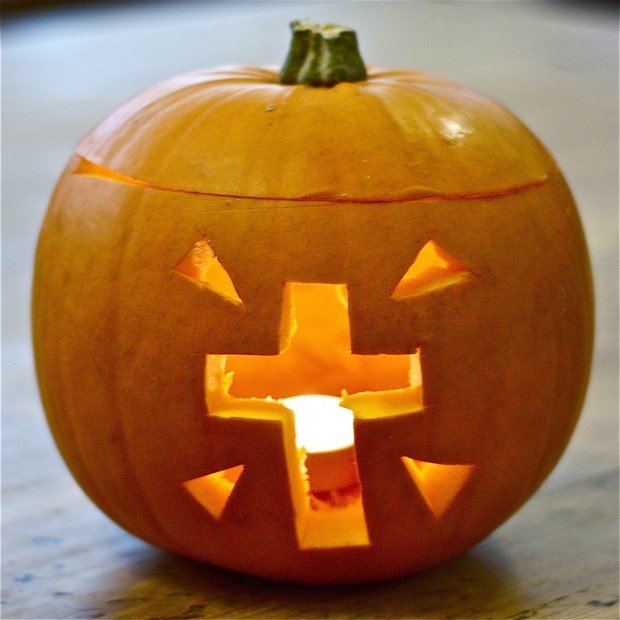 The point here is that the events that the local church offers up to attract new people are not appealing to their target audience (i.e. the unchurched). They only really appeal to the churched. The first problem with this method has only been described: those initially attracted through such methods will ultimately follow their consumerist/”subscriber” instincts and move on whenever they find a better deal. The second problem with the walled garden model is that the majority of the churched population will not be swayed by events and programs. They are tied to their churches by familial/relational ties or by the sheer force of tradition. While tradition may be overcome, in time, through a continual presentation of excellence and depth to those church-goers who belong to other churches (which may just lead back to the first problem), familial and relational ties are harder to overcome with impersonal events and programs. Rather, these ties are not to be overcome but transferred. If church-goers are faced with friends who are more excited, more passionate, more complete because of the church they attend; they are more likely to “try” a new church. They will most likely not break ties for a basketball league or similar event—though they may attend these—but they might consider doing so if they see the excellence of another church reflected in the passion and power of their friends.

When a church creates a walled garden and fills it with “alternative” activities and outlets, it has, in some ways, succeeded from the community it exists in and has created a second one within its garden. Most churches would never admit to this—and in fact, would denounce the very idea—but the point is still worth considering. When churches offer programs in the garden they are often competing with a similar—but not necessarily the exact same—program that exists outside of the garden in the community that the church is supposed to be reaching. Yet, rather than reaching out through a program that already exists, the church hides itself within a bubble, abandoning the community to its own devices. Even when the church as initiated a program within the garden that has no external component, the effect is the same: instead of initiating the program within the community where the maximum amount of unchurched people could have access to it, the church keeps the program within the walls, making it secure for its own people. Granted, the unchurched are welcomed, so long as they are willing to come into the garden.

What if the church stopped acting like a content provider? What if, instead, the church functioned as launching pad for people to enter into and engage their communities for Christ? In place of a offering a children’s sports league, send the congregation out into the community to staff, support, and even expand the community’s sports offerings, all while bring glory to God through the visible expression of our faith in Him. No longer would churches have to court families with flashy, engaging events. They would go to where the families already are and bring the gospel to them. Of course, this changed of methods would require a great deal from the people who make up the church. No longer would be able to idly sight by as subscribers, dropping out when they no longer get what they want. They must be promoted from simple consumers of church to producers within the Kingdom. The church would have to refrain from pandering to its people as if they were customers and would have to challenge them as if they were employees.

What’s your solution to the “walled garden,” or is this even a problem that needs solved? 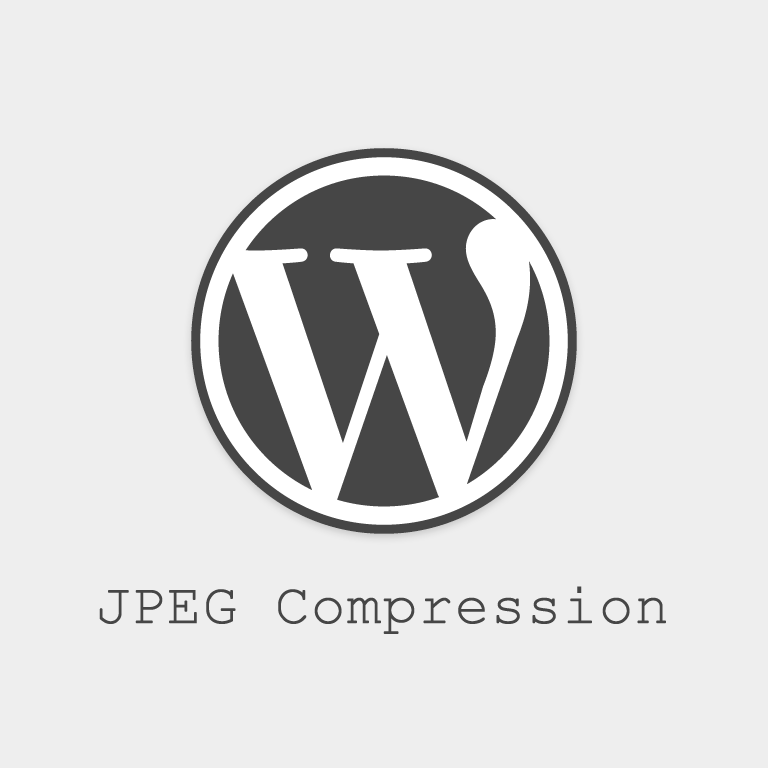 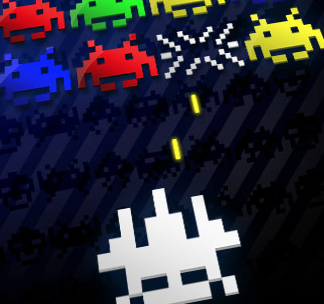 Use Your iOS Device to Control Browser Based Games