[EDITOR’S NOTE: Bummer dude. This has left the web. If you happen to see it again, let us know! If you’re looking for a church paging system, you might want to take a look at this solution.]

On a regular Sunday morning back in January, I sat in church and watched as our Children’s Minister Linda walked up on stage.

She grabbed the offered mic from our pastor, and brought it to her mouth. As she scanned the crowd and offered that jubilant smile that she always does, she began to share with the congregation a significant need:

Hi, good morning everyone! As many of you know, we have been using these little black pagers to let the parents know when their child needs them.

Taking a breath she continued:

What many of you may not realize, is that we only have sixty of these little guys, and we need about a hundred more.

I looked around at the audience, who was only half listening at the time. I can remember that it bummed me out to see people pay such a small amount of attention to someone serving “behind the scenes.” I know from being a preachers kid all my life, that Linda and her volunteers are the very people who we as a body need to love and support the most.

The unfortunate thing is that these pagers cost us about ninety dollars a piece, and so we are trying to figure out what to do.

And it was at about this moment that a proverbial “light bulb” went off in my head. Maybe it was divine inspiration, or maybe it was just the Sunday morning coffee kicking in, whatever it was, I knew instantly that I was being given a solution.

And more importantly, I knew that I had the skill set to make it work. 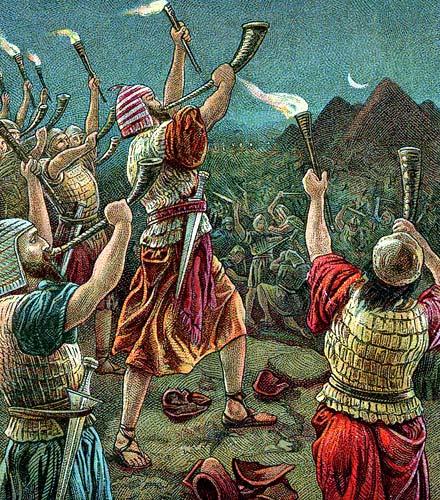 I spent a couple nights programming on the computer, getting a very basic proof of concept. But like most good things, I realized that my little experiment was going to take some serious effort. And when the scope of the effort began to form, those little voices of self doubt were only too quick to materialize:

These would come to me while I was writing code and were especially prevalent when I hit something complex.

About mid week, I was really doubting myself. I sincerely thought by this point that my idea was just plain dumb and that I should simply stop. And I remember driving up highway 97 on my way home from work, and praying:

Immediately, I regretted my spoken words. A cool name? I thought. Really? I am talking to the Lord of Creation and “a cool name” is all I could ask for? Who do I think I am, Gideon?


I sighed heavily and then began to reprimand myself by muttering:

Remember that wisdom you are continually praying for Jared? Well you should probably pray harder, because it sounds like the treatments stopped working.

Needless to say I got home pretty bummed out about my idea, but dove into playing and loving on the family. That night, as I lay in bed next to my wife, she asked me about my project. I told her simply that I just didn’t know where I was going with it. She replied simply:

Well, don’t worry. I’m sure you will figure it out.

Closing my eyes, I fell asleep. And almost immediately opened them to find the room lit by the morning sun. Bolting upright, I found that my brain was “itching” and I knew that it was working on something. I jumped out of bed, and proceeded to sprint to the kitchen, reaching for a notepad when I arrived.  Then, pulling open the junk drawer, I went hunting for a pencil. After tossing about several with broken ends, I finally found one, with what looked to have, the tiniest amount of lead available and still be considered usable. Quickly I began to write.

Agape. The Greek word for love. 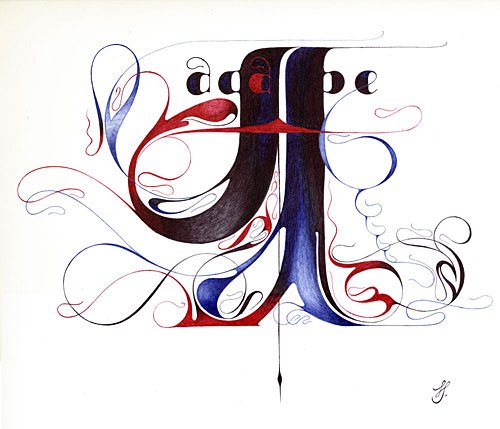 I stared down at the pad of paper.

I then found myself writing down the word “Page” which I knew in my case meant to notify or make known. Finally below these words, I finished up with a combination of the two.

Agapage I read the newly birthed name aloud, and a smile began to form on my face. For I realized that remarkably my strange prayer had been answered, and I had indeed been given “a good name”.

“Hey Mike…” I typed into iChat. Sending an instant message over the inter-tubes to my buddy, Mike Brisk. Who just so happens to be an insanely talented graphic designer.

“Whats up?” He responded.

“Well, I’ve got this little project I have been working on for my church” my fingers clacking on the keyboard I continued. “Our children’s minister is needing to purchase more pagers. But because of the recession, giving is way down.”

“How much do the pagers cost?” He asked.

“Oh, about ninety dollars a piece.”

“How many does she need?”

“Yeah exactly, anyway I created this web application that allows churches to manage their children, and then with one click of the button, it sends a txt message to all the child’s guardians if there is an issue”

“Thanks!” And I went on to explain the name Agapage and how I had been inspired with it. Then I said “There is one issue currently, it looks like utter crap. Any chance you would be willing to help?”

And not ten minutes later, Mike emails me the following logo.

I knew then, that not only did I have a good name, but I had someone who shared my vision of what Agapage could become. And with that, we both dove right in.

“Alright” I began as I sat in a cramped room with my Church leadership. “This is our church’s Agapage web portal” And showed to them the following screen. 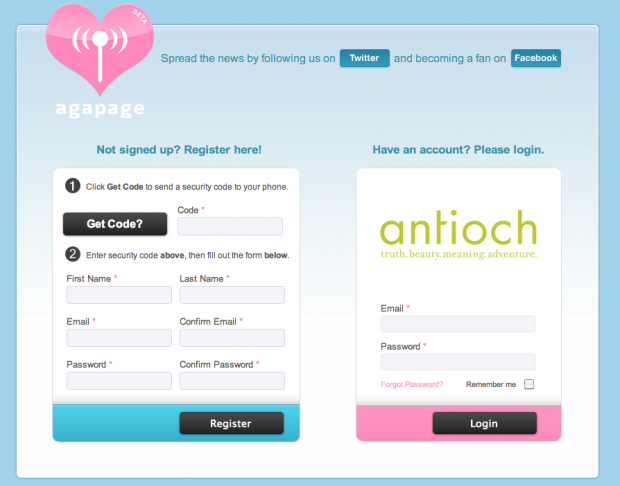 “So explain to me exactly how this works?” asked one of the leaders.

“It is really simple” I continued “Basically a parent goes to the portal and creates an account, kinda like creating a Facebook account. From there, they login and perform two primary functions. They will add all the parent information in their household. Which is basically their name, a picture, and their cell phone number. Then from that point, they add all their children’s information. Again, it is similar. Name, picture, and a notes section for allergy information or anything else the parent wants to include.” Looking around, I could see eyebrows rise and people lean forwards in their seat, trying to view the new screen that I was displaying on my laptop.

“Well, how do you txt people?” someone else asked.

“Right, well that is also really simple. Basically a volunteer or staff member can login and use the search function. This will pull up a child’s record where you can click the Page button. From there, the volunteer can add a small message to inform the parents about what is going on, and then just send it off.” I clicked on the search screen and did a query for my last name. 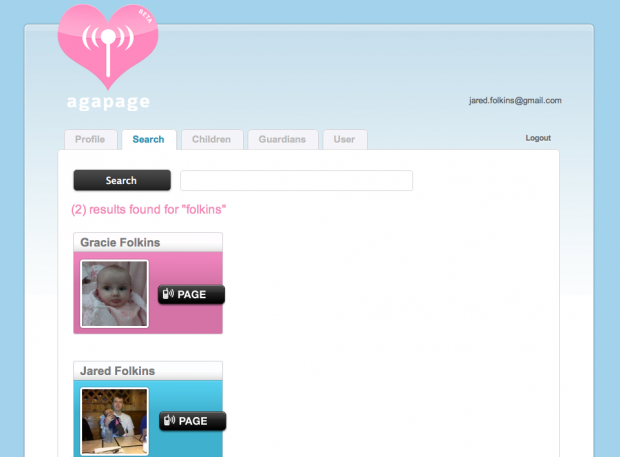 “And it txts everyone?” another person spoke out.

“Yeah, it will txt every guardian attached to that child. So in our case, I included not only myself and my wife, but also Auntie and Uncle. And when the page button is clicked, it will then send the exact same txt message to all four cell phones. Better chance of getting someone’s attention that way.” 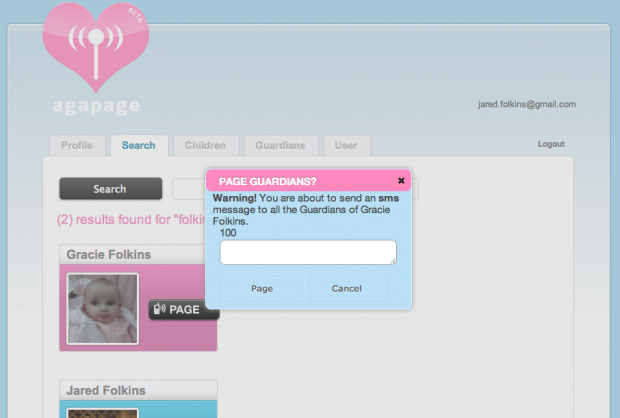 Silence fell upon the conversation, and at first I couldn’t tell if anyone liked what they were seeing. Finally someone said “Jared, you built this?” and looked at me with what I realized was astonishment.

“Well, this is just awesome! We are totally on board! When can you have this ready by?” Ken the lead pastor asked.

“Whenever you need it to be, it is good to go.” I finished.

“Dude, this sucks!” I said to Mike in frustration. It had been about a month into launching Agapage and I could feel the vision start to move towards an awkward slipping point.

“I am tired of trying to push the advantages of Agapage onto folks. Even though the price we are asking to support us barely covers our cost, and even though it saves organizations a ton of time and a ton of money , it just is not the relationship I want to have.”

“Yeah? So what are you thinking?” he asked.

“How bout’ if we adopt an open model, where an organization or individual donates what they can, when then can. Does that sound insane?” I finished.

“Man, that sounds awesome.”  he replied  “Lets pray about it.”

And so we did, and then we acted, by changing everything about Agapage to a donation based model.

I realize that it is a risk, and mentors of mine, if you are reading this, please don’t think me too foolish. But Mike and I firmly are praying that Agapage can succeed in this fashion. We understand that we won’t get rich, we understand that there is a high possibility that we will operate at a loss, but if this small ministry helps others, then we both feel that the cost shouldn’t be the road block standing in people’s way.

Regardless, I am really amazed at the collaborative effort that Mike and I have poured into Agapage. The growth in our friendship alone is sometimes what I think God really had planned for us out of the whole thing. And we are stoked to see people wanting to use something we created not only for Churches, but Day Cares, Schools, and other applications that we never even thought about originally.

Finally, and most importantly, I am happy for the fact that we are able to help the “behind the scenes” people. Those people, that we should be helping out the most.

If you’d like more information check the links below!

There are 33 comments already... Come join us! 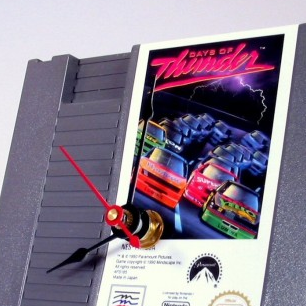