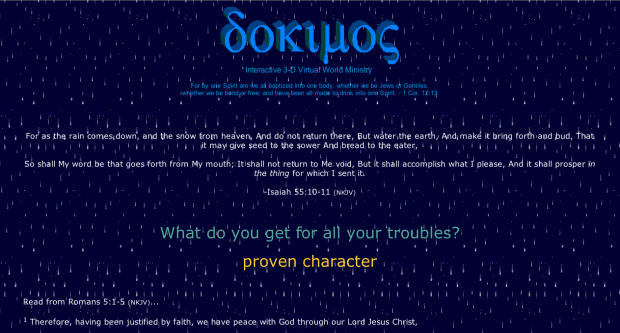 In the main group, someone posted the following topic:

I posted mine, but also started to watch the others and noticed something about many of them. The ones I noticed had simple to fix problems that could make them more effective in spreading their message.

So that I’m not calling people out, I’m not going to post links to the offender’s pages, but just describe the problem and offer solutions.

1. Not having your own domain name

I understand that some ministries are quite poor. I know mine is, but quite a lot of ministries I’ve seen piggyback on other domains. Is your church website (I’m making these examples up) firstbaptist.blogspot.com or mainstreetunitedmethodist.wordpress.com? There really isn’t a great excuse for this. Domains are often in the realm of $10 a year, yes a YEAR. There are exceptions to this. You can get a “.tv” domain for about $30 a year, but that’s still for a whole year.I’m not saying you should abandon the platform you’re on if you don’t want to, but you can redirect a domain from the registrar quickly and easily so firststreetcommunitychurch.org leads to 1stcomchurch.wordpress.com. I’ve heard concerns about using a certain registrar to register a domain name because of their advertising tactics. That’s why I use NameCheap.com which costs the same, but doesn’t advertise in the same way and also doesn’t make you click “no thanks” a bunch of times to all the stuff you don’t want.

2. Building with a free wysiwyg editor and not paying to remove the ads

I personally don’t like some of the “what-you-see-is-what-you-get” (aka wysiwyg) services out there. Some aren’t bad, but others seem to breed bad choices. Still, you can make a decent site if you hold back from what you “can” do and stick to what you “should” do. Once you’ve done that, if you’re going to go with one of these services, please pay to remove the “build a free website with us” tag from your site. It would be a little like watching the “Billy Graham Crusade” on television and having an ad for “Shure” microphones on it. I think they’re great microphones, but the ad for the tool you used to create your site is problematic, especially since you’re getting a free website in return for the ad. For some sites, ads are appropriate, but not for your church’s main site.

I don’t like either way of doing it, but if you must have audio or video playing automatically, make it stop after the first time I visit your site and make the stop button obvious. I often get to sites by clicking on a link and opening up a new tab. Sometimes I’ll open up five or six new tabs this way. Imagine if one or two started playing a video of the pastor welcoming me or a midi file of Bringing in the Sheaves. Now, what if all of them did this? It could be pure chaos. The best thing to do is to avoid auto-played media altogether.

There are a couple of reasons why images are fuzzy. Perhaps the focus was a bit off when the picture taken. What I’ve noticed though is that a lot of times the picture is fuzzy because it was too small for the space and was blown up into a larger version. If you blow it up 10%, that won’t cause this problem. If you take a 50 pixel image and blow it up to 100 or 200 pixels, it will. If that’s the case, just create a new image. Take a new picture or remake the graphic. Do whatever it takes to get a sharp image.

It’s one thing if you don’t update old stuff that is replaced by new stuff. It’s quite another if the front page says, “Celebrate the new century next Sunday.” I made that up, but I’ve seen a lot of calendars that are a lot like that having only outdated entries. If you can’t keep up with content, leave it out. I’d rather not see a calendar than only have entries from six months ago. It’s better to not have a feature than to have it, but it’s outdated.

I’ve seen this a lot. A background should either tile seamlessly or not tile. I saw a couple of sites where the background was a photograph that repeats over and over again, but it looks like someone took a single photograph of the beach and used duplicates of it to wallpaper a room. Often the website will be wide or tall enough that one of the “tiles” is cut off. It looks like it’s random or unplanned.

I’ve wanted to contact someone or a ministry and not been able to do so. The worst thing for a church is not to be able to answer questions from people who want to go, but don’t because they couldn’t ask a simple question. There are plenty of ways to do it and I don’t care if you have a contact form or have the phone number, email address, etc. Either way I want you to have a way to interact. A website is a great tool for connecting with people, but only if you provide a way to interact. Don’t forget to include that information.

So how about you?

What “sins” have you seen?

How Believable Is Your Font?