Have you taken this type of personality test?

I am sure many of you have and there are plenty of tests you can take online to find out. Understanding your own personality type, as well as others, can do a lot for personal growth and understanding in personal relationships as well as group dynamics in your Bible study or work teams on the job.

If you haven’t taken this type of test, you may want to consider doing so before moving on to this amazing Star Wars themed personality chart or leave a link in the comments so I can update this portion of the post):

END_OF_DOCUMENT_TOKEN_TO_BE_REPLACED

I get asked how much time people put into social media constantly as they see it as a huge task that is just not going to be worth it. I will say that a social media action plan without a strategy is worthless and most of the concentrated time is in developing the strategy and then it really can be as little as couple hours a week. The infographic below gives you one option to try out as a schedule, though I would highly recommend you find out what fits for you.

END_OF_DOCUMENT_TOKEN_TO_BE_REPLACED

I saw these funeral selfies and I couldn’t help but shake my head. I think it is safe to say that not only have we crossed over the proverbial line, but we seem to have lost sight of it all together. I know, I know, they are just selfies.

Everybody hates them and everybody posts them.

In the whole scheme of things, they are certainly not the worst thing to ever be posted on the Internet. However, posting pictures with one’s Grandma as she is being laid to rest is certainly questionable behavior. My first question would probably have to be don’t those kids have parents teaching them that’s not a good idea? The answer is probably a resounding, “no.” If they are like a majority of young people these days, their parents have probably given them unrestricted access to the Internet via the smartphones in their pockets, and naively forgotten to guide them through an acceptable modus operandi. These kids are footloose and fancy-free in world that is much bigger and more permanent than they can even imagine.

END_OF_DOCUMENT_TOKEN_TO_BE_REPLACED 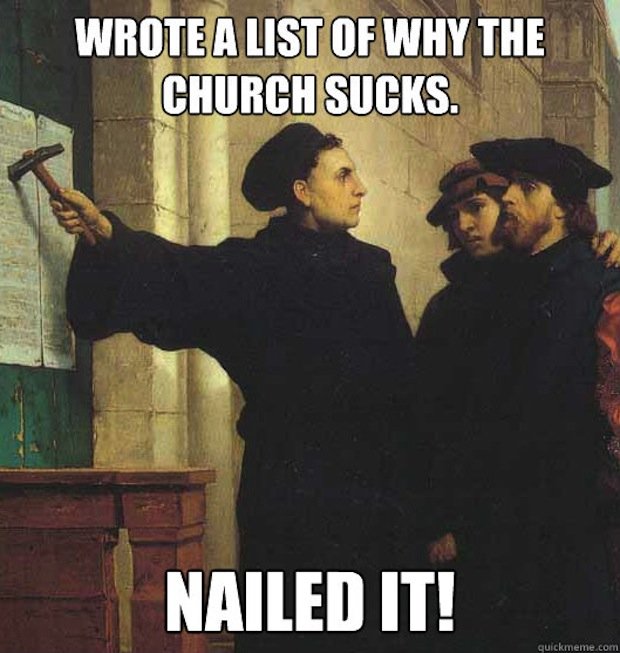 While much of the world is buzzing about Halloween and attending “harvest” parties, let’s not forget about Reformation Day.

Here’s another meme and some theological links about Reformation Day for your reading pleasure:

END_OF_DOCUMENT_TOKEN_TO_BE_REPLACED

There are a ton of great baby halloween costumes out there, including my own son’s Ironman outfit that he is wearing this year, but I may have found the best one ever created. It’s an LED stick-figure outfit that makes their child look like an animated stick-figure. It is a custom-made outfit so do not go out looking to buy one (though I know you techies could put it off quickly) and it is best done in pure darkness, but is absolutely crazy when you see the child running at you.

END_OF_DOCUMENT_TOKEN_TO_BE_REPLACED

Thomas Kinkade may have been a well-known artist, but for many people his art is a bit too…sweet. Safe. Perfect.

But when you combine Kinkade’s art with Star Wars, that’s just plain awesome. The result: Wars on Kinkade.