This is a Guest Post by Vajaah Parker, who’s live-blogging the BibleTech 2010 event!

Developers get ready, api.biblia.com was launched by Logos during BibleTech 2010.

Read the blurb from their site:

Specifically, there are services that get information about the available Bibles (Find, Image), download the text of those Bibles (Content), and search those Bibles (Search).

APIs unlock the magic of web platforms and make them endlessly extensible and individually suited.

END_OF_DOCUMENT_TOKEN_TO_BE_REPLACED

This is a Guest Post by Vajaah Parker, who’s live-blogging the BibleTech 2010 event!

Informative sessions abound but Stephen Smith’s, “Tweeting the Bible,” 45 minute visualization of his 10 month (April 2009 – February 2010) research project made me stop tweeting and garner the greatness.

Stephen compiled statistics on the number and nature of tweets containing bible quotes and citations. His brilliance is hard core and he wrote programs to visualize his data in every graph format imaginable including a periodic table portrayal of the frequency of verses tweeted by book, chapter and verse.

END_OF_DOCUMENT_TOKEN_TO_BE_REPLACED

I’ve seeing more and more of these each week it seems and although it is a neat technology it still hasn’t reach critical mass in terms of adoption: The Quick Response Code.

If you’re not familiar with the tech, here’s an overview from Wiki:

A QR Code is a matrix code (or two-dimensional bar code) created by Japanese corporation Denso-Wave in 1994. The “QR” is derived from “Quick Response”, as the creator intended the code to allow its contents to be decoded at high speed.

Although initially used for tracking parts in vehicle manufacturing, QR Codes are now used in a much broader context, including both commercial tracking applications and convenience-oriented applications aimed at mobile phone users (known as mobile tagging).

Makes sense and has high utility. Wonder why it really hasn’t been adopted as much…!

END_OF_DOCUMENT_TOKEN_TO_BE_REPLACED

One of our blog teams who represented at the MISE2010 conference had enough time to snap this photog in between sessions.

What a bunch of goofs…! 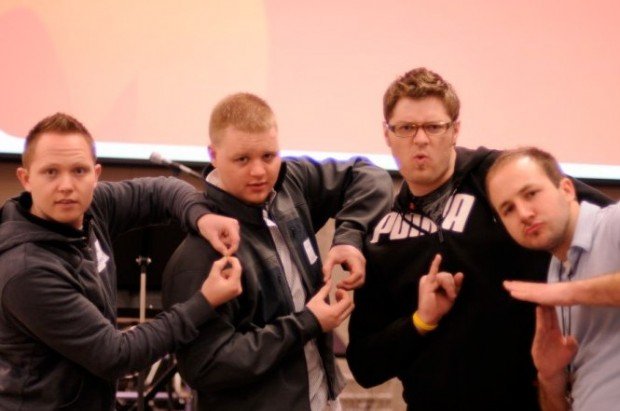 But, we seriously love it. The fact that people that we’ve never met are as passionate as we are about web technology and social media freaking knocks our socks off.

So, we’re sending you some love. Check this out guys!

END_OF_DOCUMENT_TOKEN_TO_BE_REPLACED

Let’s say that you really like WordPress and that you haven’t been interested in using any of these other project management applications.

Why not try CollabPress? It’s a WordPress plugin that takes your installation and makes it a project management system.

Check out this video after the jump…

END_OF_DOCUMENT_TOKEN_TO_BE_REPLACED

A Simple and Customizable Iconset

A great iconset that has a few different color options. Thanks @BenjMiller for the tip!

Any other sets that you consistently use?