Smarter Use of Technology and Advertising Please

Google has been a blessing from above for the evangelical community and it’s provided many of us (if not all?) great products to use for our lives and ministry work.

But sometimes it backfires. 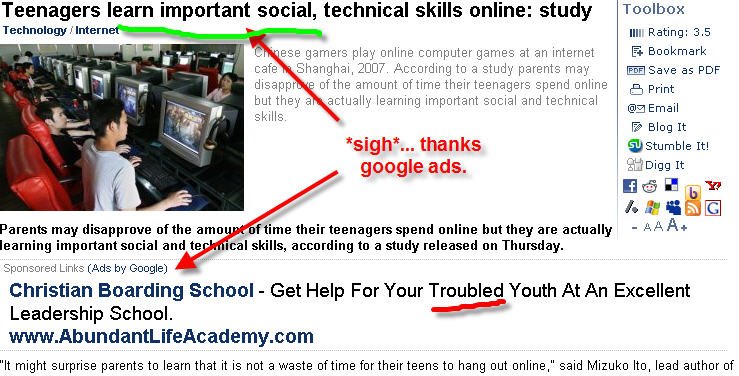 For example, I saw this great article about how “Teenagers are learning valuable social and technical skills online” and was excited to jump in.

But what I immediately saw after about 5 seconds was this conflicting and contradictory advertisement by a Christian boarding school for troubled teens, and this frustrated me enough to blog about it.

Now I’m all for advertising, but only if it’s leveraged wisely, thoughtfully, and strategically.  And if you’re going to give up control of your advertising with the Google-monster, you’d better be aware of the plentiful shortcomings.

Technology is great, but it’ll smack you in the face if you aren’t careful.  Defending your brand, not the mention the “brand” of the Church is important too. 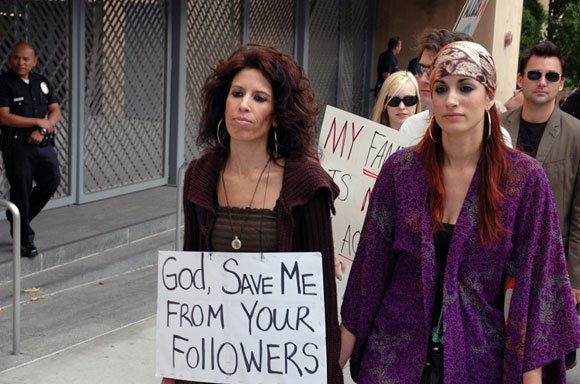 And this isn’t just about the readers, either.  It’s about the organization!  That website was on the top Digg-list for a while, meaning that it received more hits that day than probably the life of the entire website.

That means, among a number of other things, that valuable advertising dollars were wasted because they weren’t reaching the intended target audience.

Especially in this economy, you can definitely afford to do a little more thinking about it… because wallets are tight everywhere.

So do it for yourself.  Let’s all be a little more careful when we seek to use technology for our ministries and organizations.  Make sure you know what you’re getting into.

It’ll save you time, money, resources, heartache, and potential embarassment.

Converging the Web and Desktop

If you’ve been in the web tech field for a while you’ve already begun to hear the conversations swirling above our small heads about the convergence of the web and the desktop (or even the full port over to the web as a desktop).

Essentially, some are arguing that we’re moving to a place where the web is rapidly becoming the “new” desktop: That’s because our abilities to do almost everything on the browser layer is becoming a reality.

My thoughts are mixed.

Although I like the idea and I’ve rejoiced in the ability to do things that desktop apps could once only do, the biggest roadblock for me is the fact that we’re still subject to hardware.

You see, regardless of all the functionality in the world, we still need an ethernet cord and an internet connection (or if you go all wireless… same thing is true).  If you’re internet is down, then so is your life.

So a convergence of the two paradigms seems logical and reasonable until the confidence in the hardware leans a bit closer to the confidence I have in my own salvation (which is a tall order…)!

If you want a good “taste” of what all of this confounded babel-speak is all about, try hitting that “turbo” button in the top right hand side of your screen.

Like when you used to say it on the elementary school playground as you dashed around the slide saying “i’m going turbo speed!!!”  … (maybe that’s just me).

Again, this is only possible if you’re running WordPress, but what this does is it installs Google Gears on your system, a funky little plugin that extends your browser to give you much more rich experience (Official WordPress post).

For those that hate having to wait that “extra” second for the modal window to pop up for you to edit or add a picture… this one’s for you.

The kicker?  Once you’ve installed it and run it you’ve now stepped into the conversation of convergence of web and desktop… and you’re nerd-factor just increased.

I’ve been messing around with Zenbe, a new email aggregator that’s so much more than just email, and I honestly don’t know what to think about it yet.

Released to public BETA now (which means you can get one with a little wait) it’ll take your gmail, hotmail, and a few other email services and put them alongside your twitter, facebook, and google talk. 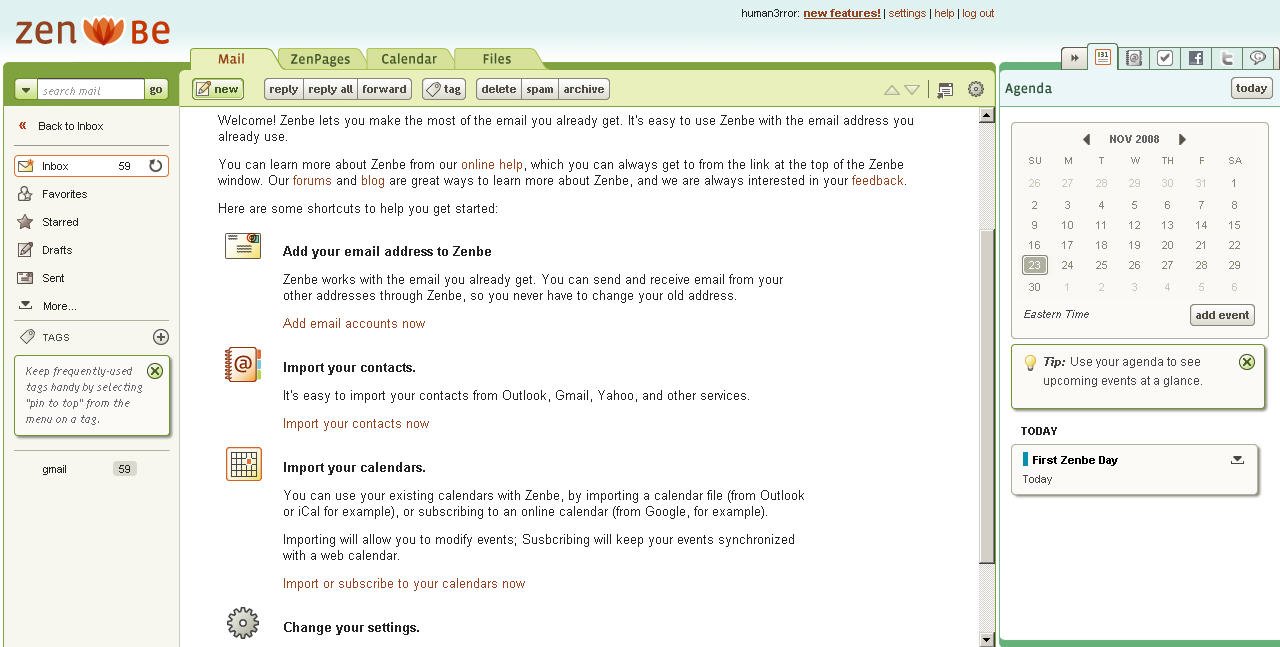 You can also create agenda’s, manage a calendar, sort through pictures that are in your emails and/or attachments (coolest thing so far) and create “ZenPages” where you can pull in feeds and more.  You can even share these pages with others and have real time discussions and chat.

But this is the killer Q: is the whole greater than the sum of it’s parts?  Or vice versa?

From my end of the stick I can’t seem to find the collective value in the mashed-together services which lose some of their respective functions, and especially some of the 3rd party apps for the services which make it possible to do what I do.

For example, losing TweetDeck for Zenbe’s extremely limited Twitter service would really stink.  Or creating new “tags” for my gmail but losing my already current “Label” structure is pointless.

Yet, I’m willing to give it a shot.  If you’re feeling brave, sign up for BETA, import some data, and tell me what I’m missing… because I think I’m missing a lot.

But here’s the thing:  Zenbe, in my opinion, is probably the closest thing to what a lot of ministries and businesses who are making evangelical apps end up doing: Cobbling services together to produce a presumed add-value when it’s simply not necessary.

Any who, give it a go and let me know!

Today’s Friday 5 is with Brad Singleton, the Internet Pastor and Campus Director of SeaCoast Church.

Short and sweet today… since I’m headed to Korea…!

How do you see Web Technology impacting The Kingdom?

Even more than that, it is redefining church and challenging a lot of church leaders to sift and separate “the way we’ve always done it” from “this is what God has called us to”. It’s also bringing the global Church closer to each other, and enabling them to share resources and ideas in a more open way. Oh yeah, people are becoming fully devoted followers of Christ too; which is cool If you’re into that sort of thing : ).

Drop.IO is my Homeboy

Drop.IO, a file sharing service with a smile, tags itself as a place where you can share files in “2 clicks”.

I’d like to think that was possible, but I typically start counting the moment I hit the page, and so far I’ve been able to share upload a file and download it on another computer in 6 clicks…

If you need to share files (up to 100 megs for free) really quick to many different people without having to worry about whether they “have an account” or “have to register” or “be my friend” then Drop.IO is it for you.

Did I mention that they just went through a new GUI improvement?  Make a drop with style.

At least it’s the best for today (until I find a new one tomorrow…)!  Although I’ve already written about some other services, you need to check this one out as well.

BrightKit.com is rocking it and really you just have to test-drive this thing to understand how sweet it is. 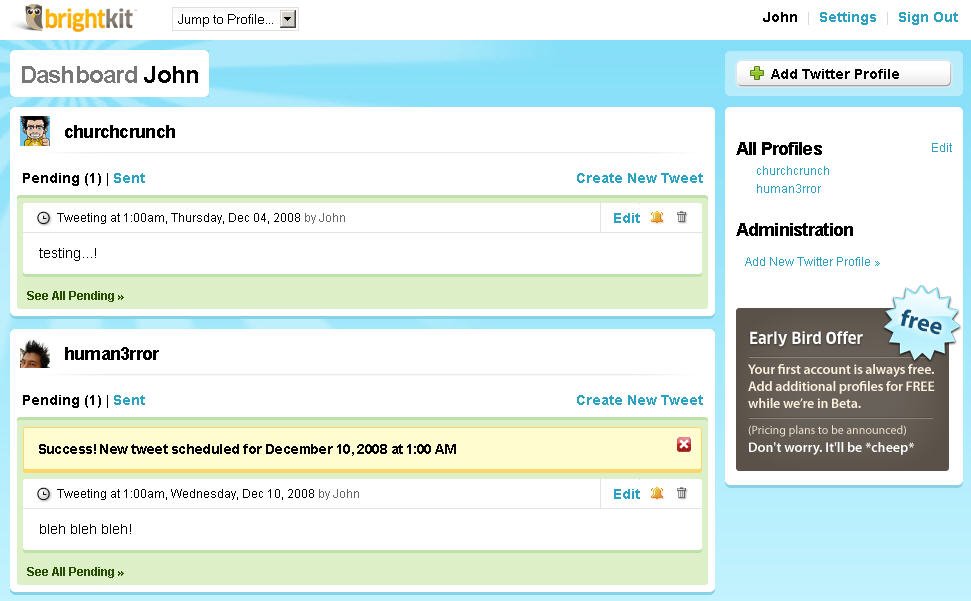 Although many of you probably do not have more than one Twitter account, I firmly believe that ministry organizations will begin creating ones.

In fact, I already know that many church’s already have twitter accounts. But, the “church” isn’t managing it (because in-animate objects still can’t type in 140 chars or less… someone tell me when this is possible please!)… people are. 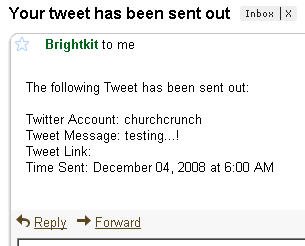 BrightKit may be your best shot out the gate. Just take a look at some of these cool screenshots and see how gosh-darn pretty it is.

In addition, you can add not only multiple accounts to manage but also multiple administrators… I would highly suggest creating an account NOW because additional accounts will apparently cost you some extra cash when they get out of BETA.

Finally, they’ve got some cool developments… like stats!  Everyone likes stats, right?