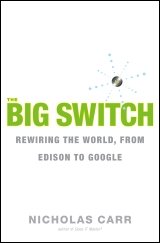 Stephen Colbert comes up in my readers and “random” web browsing far too often and is typically a source of either early morning humor or another link I hit while “browsing-bored.”

But, coming across his interview with Nicholas Carr made me whip out a notepad and jot down a couple of very intriguing quotes.

Carr has written a book called “The Big Switch – Rewiring the world from Edison to Google” and here are some of his thoughts with Colbert:

The world wide web is becoming the world wide computer… We’re using the internet so much that we’re starting to think like it.

In time, we begin to look like and act like the tools we use… beginning to think like a computer, jumping from information to information, link to link.

But what it takes away is our ability to concentrate, be contemplative, to be reflective, to slow down and think…  We can’t stay focused on one thing, we become so connected to everything that we’re disconnected from one thing… It’s the ability to sit down, and read deeply, think deeply, and concentrate on one thing, one line of thought.

But it’s this that really struck me:

You [Colbert] are the New Google Man, who sits at home with a superficial relationship with information.

The previous quotes were unsettling, but this one struck a chord.  It made me think about how much time I spend engaging and interacting with dead content.  How much of it is one way.  It truly is a strange relationship, and very superficial.

Is this what it’s supposed to be about?  It would be easy to say that Carr is right but hope against hope that there are a few who are trying to make sure that this isn’t what it all, eventually, becomes.

I want to be intentional with my time, purposeful and productive.  I also want to build relationships.  Let’s endeavor not to be “google men.”

State of the Blogosphere

[site doesn’t seem to be up anymore] has just finished their gigantic State of the Blogosphere report which had more facts, figures, pie and bar charts than one could possibly digest in a single sitting.

I’ve noted some of the highlights from the past 5 days and their relative importance for those that seek to use their blogs as a communication medium for the Gospel.